In the laboratories of Tomsk Polytechnic University young scientists have obtained antibiotics for the treatment of plants from non-pathogenic strains of Pseudomonas - a genus of bacteria. Such a process is considerably cheaper than chemical synthesis, it is harmless to humans and the environment. 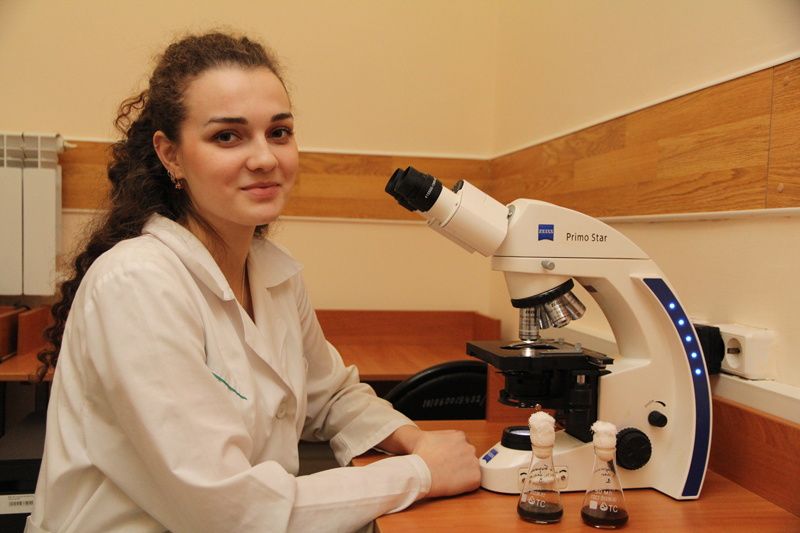 Photo: Tatiana Rabina, a graduate student from the TPU Department of Biotechnology and Organic Chemistry.

The project is carried out by graduate student from the Department of Biotechnology and Organic Chemistry, Tomsk Polytechnic University. According to one of participants of the project Tatiana Rabina, in the laboratory researchers obtain three types of antibiotics - phenazine-1-carboxylic acid, hydroxyphenazine and 1-hydroxyphenazine -carboxylic acid.

“These are broad-spectrum antibiotics, they fight against almost all harmful bacteria, which are harmful to plants.

Antibiotics are obtained by submerged cultivation. Bacteria were placed in a special liquid medium in which they begin to synthesize antibiotics. Several days later the desired substance is recovered from the culture medium. The polytechnicers receive bacteria for experiments from the Russian National Collection of Industrial Microorganisms.

“Currently we are further testing antibiotics on the antifungal activity. In the literature there is information that these antibiotics have anti-fungal effect, but it is necessary to verify experimentally that we intend to do. Also, our data suggest that antibiotics may act as stimulators of germination,”- says the young scientist.

Nowaday phenazine antibiotics for agriculture are obtained by chemical synthesis. But this method has some significant drawbacks - a high price of reagents and toxicity.

“The reagents used for synthesis of the antibiotics are toxic. Some reagents are required special conditions to operate. In biosynthesis such kind of reagents are not required, which makes the method more safe and cost-effective.

The antibiotics themselves do not adversely effect on plants, embed in their structure and have harm to humans,”