The Cited Scientists project summarized publication activity of TPU scientists in March 2017. The university publication register enlisted 41 articles in journals with high IF; 32 articles were published in Q1 and Q2 journals. H-index of the most cited co-author of TPU scientists is 64. The IF of the most rated journal is 9.472 (the StrAU of Nuclear Technology for Oncology). The journal released an article on the progress in the description of multiquark states as molecules in high energy physics co-authored by Prof. Valery Lubovitskij from the Department of Higher Mathematics and Mathematical Physics. 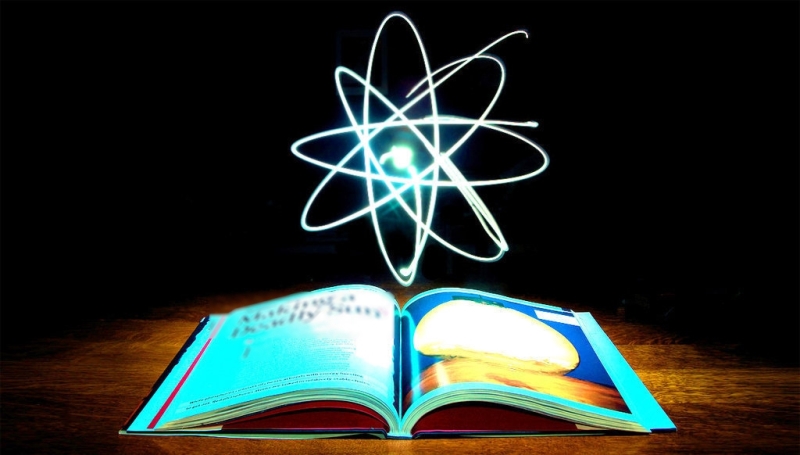 According to the Publication Development Office, TPU made a debut in the March issue. Valentina Moskvina, a graduate student from the Department of Material Science in Mechanical Engineering, published an article in the Journal of Materials Science (IF=2.302 Q2). The article’s topic refers to the StrAU of Space Materials Science.

The seminar presentation is available at the following link, as well as on Facebook.

Valery Lubovitskij, a professor of the Department of Higher Mathematics and Mathematical Physics, et al.

Journal: Progress in Particle and Nuclear Physics (IF 9.472; Q1)

The article reports on the progress achieved in the last decade in the description of heavy exotic resonances using phenomenological Lagrangians, the hadron-molecular approach developed by a research team from Tubingen and Beijing. In particular, they presented a comprehensive analysis of the decay properties of exotic heavy mesons and hadrons.

Anton Galazhinskiy, a professor of the Department of Higher Mathematics and Mathematical Physics.

Dynamical realizations of the most general N = 4 superconformal group in one dimension D(2, 1; α) are reconsidered from the perspective of the R-symmetry subgroup SU(2). It is shown that any realization of the R-symmetry subalgebra in some phase space can be extended to a representation of the Lie superalgebra corresponding to D(2, 1; α). Novel couplings of arbitrary number of supermultiplets of the type (1, 4, 3) and (0, 4, 4) to a single supermultiplet of either the type (3, 4, 1), or (4, 4, 0) are constructed. D(2, 1; α) superconformal mechanics describing superparticles propagating near the horizon of the extreme Reissner-Nordström-AdS-dS black hole in four and five dimensions is considered. The parameter α is linked to the cosmological constant.

Article:  The effect of interfaces on mechanical and superplastic properties of titanium alloys

The effect of volume fraction of the β-phase on the mechanical and superplastic properties of ultrafine-grained titanium alloys with grain size d of ~0.2 µm was investigated by transmission and scanning electron microscopy, X-ray diffraction analysis, and tensile test experiments. The ultrafine-grained structure of the materials was formed by the multi-directional pressing technique. The structure in question is shown to improve the mechanical properties by 30–50 % and to lower down to 823 K, the temperature at which superplastic flow starts as compared to coarse-grained analogs, no matter what the phase composition and concentration of the alloying elements used. The reduced temperature is attributable to the activation of diffusion-controlled grain boundary sliding in the case of nonequilibrium interfaces of materials produced by severe plastic deformation. The fraction of the β-phase and its precipitation pattern are found to have significant influence on the temperature range in which superplastic flow occurs and on the maximum elongation to failure. A near-β Ti-5Al-5Mo-5V-1Cr-1Fe alloy with a large fraction of the β-phase (>34 %) under superplastic conditions exhibits record-breaking strains (>1300 %) that do not cause fracture of the material and extremely low flow stresses. This is associated with the activation of the grain boundary sliding due to an increase in the diffusivity along the phase boundaries in a case of microduplex structure. 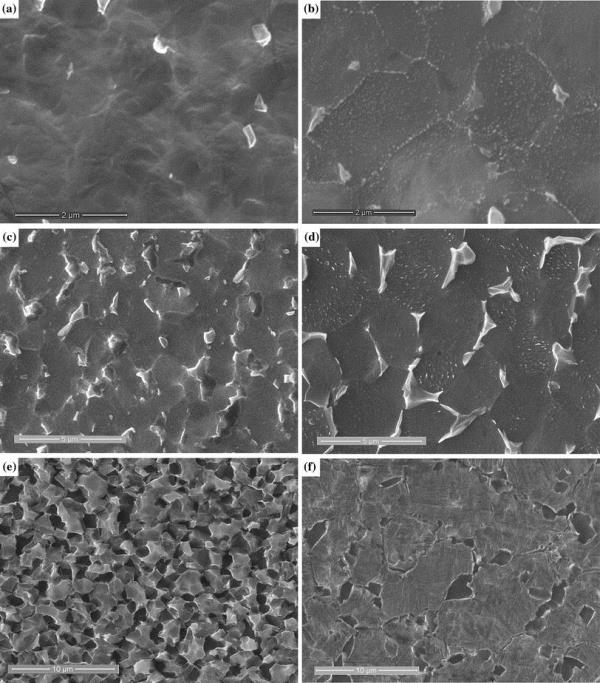 The bromination activity of tetrafluorobromates of alkali and alkali-earth metals increases in the order KBrF4, CsBrF4, RbBrF4 and Ba(BrF4)2. The most active tetrafluorobromate—Ba(BrF4)2 is able to selectively brominate the deactivated aromatic compounds nitrobenzene and 4-nitrotoluene, but not the activated compounds benzene and toluene. In all cases bromination of methyl groups of methylbenzenes does not occur. Ba(BrF4)2 forms the known complex C6H5N·BrF3 when reacted with pyridine. Due to dilution by inert BaF2, this pyridine-based complex is air stable and can be considered as safer and more convenient reagent in comparison with the original fluorobromates; it can selectively brominate benzene and toluene in contrast with tetrafluorobromates.

Journal: Proceedings of the National Academy of Sciences of the United States of America (IF 9.423; Q1)

Black carbon (BC) in haze and deposited on snow and ice can have strong effects on the radiative balance of the Arctic. There is a geographic bias in Arctic BC studies toward the Atlantic sector, with lack of observational constraints for the extensive Russian Siberian Arctic, spanning nearly half of the circum-Arctic. Here, 2 y of observations at Tiksi (East Siberian Arctic) establish a strong seasonality in both BC concentrations (8 ng⋅m−3 to 302 ng⋅m−3) and dual-isotope–constrained sources (19 to 73% contribution from biomass burning). Comparisons between observations and a dispersion model, coupled to an anthropogenic emissions inventory and a fire emissions inventory, give mixed results. In the European Arctic, this model has proven to simulate BC concentrations and source contributions well. However, the model is less successful in reproducing BC concentrations and sources for the Russian Arctic.

In this paper a new polymers based on dimethyl ether norbornenedicarboxylic acids were prepared by ring-opening metathesis polymerization in the presence of a catalyst of Hoveyda-Grubbs II. The resulting polymers and monomers were characterized by NMR, IR, GCMS, TGA, DSC. Chemical yield of investigated processes was more than 95 %, molecular mass of the obtained polymers was also relatively high (more than 4.5•106 g/mol). The research findings have shown that polymers obtained with bi- and tri-functional comonomers are more heat resistant and are stable up to the 370 °C. Also it was shown that the addition of bi-and tri-functional comonomers facilitates the significant improving of mechanical and physical properties. Polymer obtained with 3 wt.% of tri-functional comonomer possesses the biggest values of modulus of elasticity in flexure, breaking elongation and breaking strength.

Article: Can a Photosensitive Oxide Catalyze Decomposition of Energetic Materials?

Organic–inorganic interfaces provide both intrigues and opportunities for designing systems that possess properties and functionalities inaccessible by each individual component. In particular, the electronic, catalytic, and defect properties of inorganic surfaces can significantly affect the adsorption, decomposition, and photoresponse of organic molecules. Here, we choose the formulation of TiO2 and trinitrotoluene (TNT), a highly catalytic oxide and a prominent explosive, as a prototypical example to explore the effect of a catalytic oxide additive on the photosensitivity of energetic materials. We show that whether or not a catalytic oxide additive can help molecular decompositions under light illumination depends largely on the band alignment between the oxide surface and the energetic molecule. For the composite of TiO2 and TNT, the lowest unoccupied molecular orbitals (LUMOs) of TNT merge within the conduction band (CB) of TiO2. As such, no optical transition corresponding to available laser energies is observed. However, oxygen vacancy can lead to electron density transfer from the surface to the energetic molecules, causing an enhancement of the bonding between molecules and surface and a reduction of the molecular decomposition activation barriers. Therefore, when other (than optical) forms of energy (shock, heat, etc.) flow into molecules, molecular decompositions may be triggered more easily.

Article: Promoting Effect of Co, Cu, Cr and Fe on Activity of Ni-Based Alloys in Catalytic Processing of Chlorinated Hydrocarbons

A series of sponge-like Ni1−xMx (M = Cu, Co, Cr, Fe; x = 0.00–0.10) alloys was prepared via synthetic routes with subsequent reduction in H2 atmosphere at 800–1000 °C. Formation of Ni-based solid solutions with face-cantered cubic (fcc) lattice of nickel was proven by X-ray diffraction analysis for all prepared samples. Ni1−xMx alloys were explored as precursors for self-organizing catalysts active in processing of 1,2-dichloroethane into carbon nanomaterial (CNM). According to kinetic studies of CNM growth performed at 600 °C, the catalytic activity of Ni1−xMx samples changes as follows: Cr > Co–Cu ? Fe. Ni–Cr sample showed rather stable performance during 4 h whereas Ni–Co, Ni–Cu and Ni (reference) samples underwent rapid deactivation after ~150 min of reaction. The presence of the residual amount of Cr (0.5 at.%) found by energy dispersive X-ray microanalysis method in the composition of active Ni particles responsible for the growth of CNM is considered to be a key factor providing the stable catalytic performance. The obtained carbon product is represented by well-ordered segmented fibers (0.4–0.8 μm in diameter) and characterized with comparatively high textural parameters (surface area 290–330 m2/g, pore volume 0.43–0.57 cm3/g). 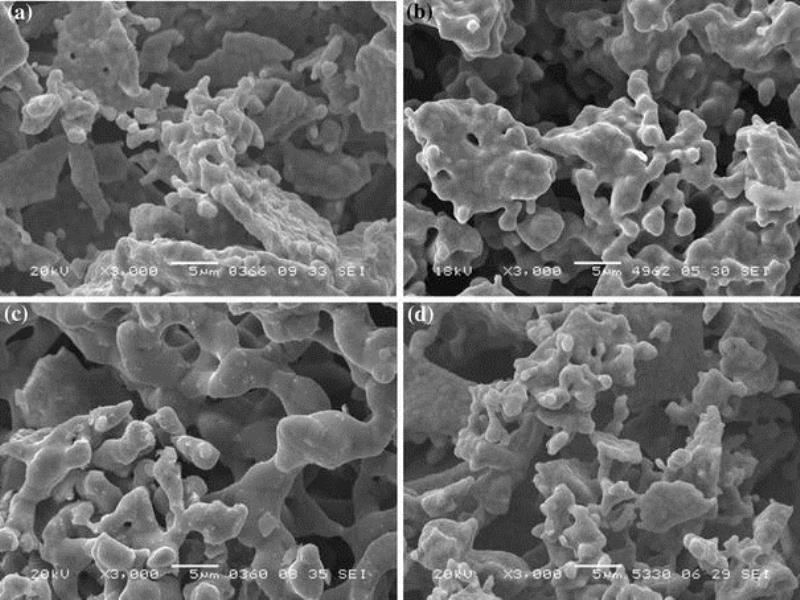 Leonid Kapilevich, a chair of the Department of Physical Training, et al.

Extensive exercise increases the plasma content of IL-6, IL-8, IL-15, leukemia inhibitory factor (LIF), and several other cytokines via their augmented transcription in skeletal muscle cells. However, the relative impact of aerobic and resistant training interventions on cytokine production remains poorly defined. In this study, we compared effects of dynamic and static load on cytokine plasma content in elite strength- and endurance-trained athletes vs. healthy untrained volunteers. The plasma cytokine content was measured before, immediately after, and 30 min post-exercise using enzyme-linked immunosorbent assay. Pedaling on a bicycle ergometer increased IL-6 and IL-8 content in the plasma of trained athletes by about 4- and 2-fold, respectively. In contrast to dynamic load, weightlifting had negligible impact on these parameters in strength exercise-trained athletes. Unlike IL-6 and IL-8, dynamic exercise had no impact on IL-15 and LIF, whereas static load increases the content of these cytokines by ~50%. Two-fold increment of IL-8 content seen in athletes subjected to dynamic exercise was absent in untrained individuals, whereas the ~50% increase in IL-15 triggered by static load in the plasma of weightlifting athletes was not registered in the control group. Thus, our results show the distinct impact of static and dynamic exercises on cytokine content in the plasma of trained athletes. They also demonstrate that both types of exercises differentially affect cytokine content in plasma of athletes and untrained persons.

Anton Krysko, an engineer of the 3D-modeling Research and Educational Center, et al.

Journal: Communications in Nonlinear Science and Numerical Simulation (IF 2.834; Q1)

In this work, a size-dependent model of a Sheremetev-Pelekh-Reddy-Levinson micro-beam is proposed and validated using the couple stress theory, taking into account large deformations. The applied Hamilton's principle yields the governing PDEs and boundary conditions. A comparison of statics and dynamics of beams with and without size-dependent components is carried out. It is shown that the proposed model results in significant, both qualitative and quantitative, changes in the nature of beam deformations, in comparison to the so far employed standard models. A novel scenario of transition from regular to chaotic vibrations of the size-dependent Sheremetev-Pelekh model, following the Pomeau-Manneville route to chaos, is also detected and illustrated, among others.

Valentina Moskvina, a graduate students of the Department of Materials Science in Mechanical Engineering, et. al.

Article: Effect of hydrogenation on mechanical properties and tensile fracture mechanism of a high-nitrogen austenitic steel

Austenitic stainless steels are frequently used for hydrogen applications due to their high ductility at low temperatures and lower hydrogen environment embrittlement compared to ferritic steels. We study the effect of electrochemical hydrogen saturation up to 40 h on tensile behavior and fracture mechanisms in high-nitrogen austenitic 17Cr–24Mn–1.3V–0.2C–1.3N steel. Hydrogen saturation weakly influences the characteristic of stress–strain curves, but decreases steel ductility, yield stress, and ultimate tensile stress. Hydrogenation provides a change in steel fracture peculiarities—a hydrogen-assisted thin brittle surface layer of ≈5 μm and ductile subsurface layer of 50–150 μm in width in hydrogen-saturated specimens. The subsurface layer shows ductile transgranular fracture with elongated dimples and flat facets. The central parts of fracture surfaces for hydrogenated specimens show ductile fracture mode similar to hydrogen-free state, but they include numerous secondary cracks both for central part and for transition zone between ductile central part and subsurface layer associated with highest hydrogen saturation. The possible reasons of decrease in hydrogen-associated ductility and change in fracture character are discussed.