Scientists from TPU and scientific centers of the USA, China and Germany have discovered unusual self-organization of atoms in the volume of nanoparticles and have learned to control it by electric field. Such "controlled" nanoparticles can be used to generate capacious non-volatile random access memory (NRAM), quantum computers and other next generation electronics. 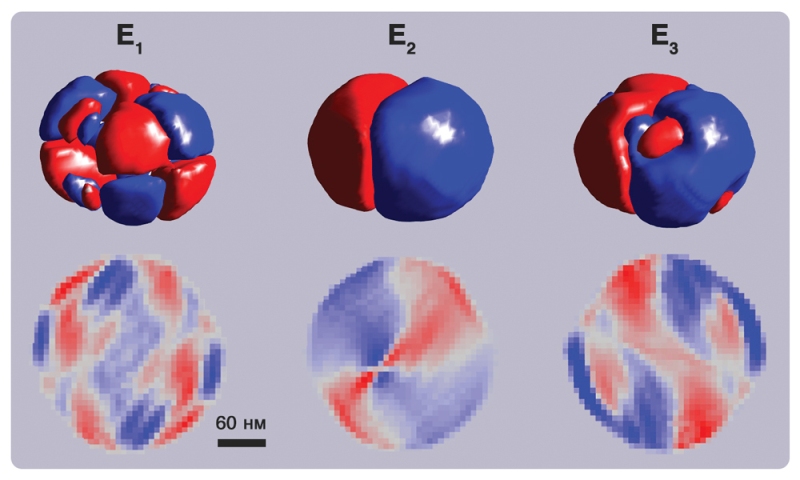 The study was released in Nature Commnucations.

The first author is Dmitriy Karpov, engineer of the Department of General Physics, TPU, who explains that in modern materials science the defects of matter are divided into two large groups. The first group includes classical, well-studied defects, when atoms in matter are mechanically disordered, i.e. some atoms are removed or, on the contrary, inserted in the lattice. The other group doesn’t have any significant changes. Instead, the spatial organization of the lattice itself changes and such defects are called topological.

‘One of the important topological defects is a topological vortex which looks like a discernible twisting caused by a small displacement of all atoms.

The vortex core is a nanostrand which can be both displaced by the field, and erased and restored again within nanoparticles’, explains Edwin Fohtung, Professor of Los Alamos National Laboratory and New Mexico State University .

The scientists studied barium titanate nanoparticles whose internal structure was visualized with the help of penetrating X-ray radiation from the synchrotron Advanced Photon Source (Chicago, USA). They obtained the image of the volume of nanoparticles with the resolution of 18 nanometers, which enabled to analyze the slightest changes in the structure. As a result, the researchers showed that external electric field can displace the core of the topological vortex inside the nanoparticle, and when the field is removed, it returns to its original position.

Modern components of electronics are gradually becoming smaller and smaller. This can significantly influence the efficiency of devices which will be significantly reduced due to different quantum effects. One way to circumvent these limitations is to use topological vortices. Thus, they can be used to generate high density NRAM or quantum computers in which information will be encrypted in the characteristics of topological vortices.

‘All in all, the possibility to control and adjust topological vortices in nanoparticles is important for the creation of new electronics’, concludes Dmitriy Karpov.