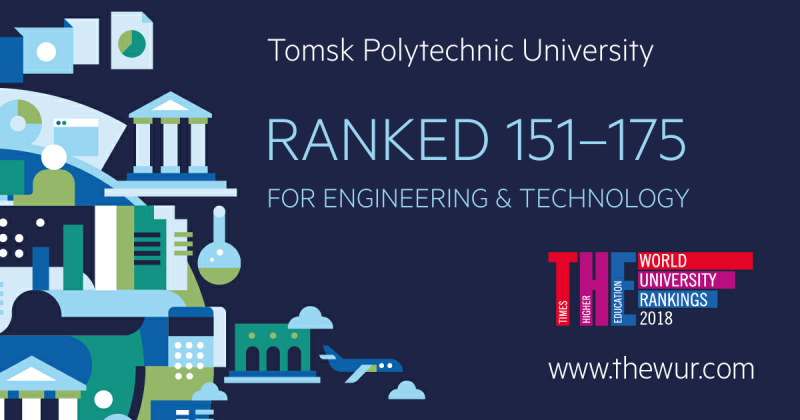 Times Higher Education World University Rankings looked at the full range of the university’s activity, such as the research progress, income from industry, citations, and international outlook. The ranking includes a variety of subject domains: General Engineering, Electrical and Electronic Engineering, Mechanical and Aerospace Engineering, Civil Engineering and Chemical Engineering.

“For the first time ever TPU joint THE ranking by subject in Engineering and Technology nearly getting into the top 100 and slightly falling behind Lomonosov Moscow State University. .

Engineering and Technology is a basic and core subject domain at TPU since it is focused on achievements and indicators in those disciplines where TPU is considered the leader.

This includes General Engineering, Electrical and Electronic Engineering, Mechanical and Aerospace Engineering, and Chemical Engineering. THE ranking results confirm the fact that during recent years TPU gained progress in research activity within the aforementioned domains. TPU also became renowned for its publication activity, international outlook, and the number of joint projects with world leading research centers”.

This summer “Tomsk-TPU-120” satellite – the first spacecraft designed via 3D technologies and unique materials – was launched into the Earth’s orbit. The satellite was designed within the space experiment RadioScaf at TPU research center “Modern Production Technologies” together with the Rocket and Space Corporation Energia (RSC Energia) and the Institute of Strength Physics and Materials Science SB RAS (ISPhMS SB RAS). This is one out of many breakthroughs within this tandem, i.a. there is a 3D printer that operates in zero-gravity conditions and in 2018 it will be tested at the International Space Station (ISS).

TPU scientists also design beryllium production plant with production technology itself developed at TPU. Besides, a thermal defectoscope, designed at the university, will be used in manufacturing of a new plane fully made of composite materials.