Scientists from Tomsk Polytechnic University and their foreign colleagues synthesized nanotubes out of titanium dioxide on the surface of titanium implants, on which calcium-phosphate coatings identical in composition to human bone, are applied. Such coatings will make it possible to improve the survival of bone implants: nanotubes due to a high specific surface area will reduce loads on the implant during movements. Besides, different drugs to be delivered to the patient’s body helping to fight with certain diseases may be loaded. 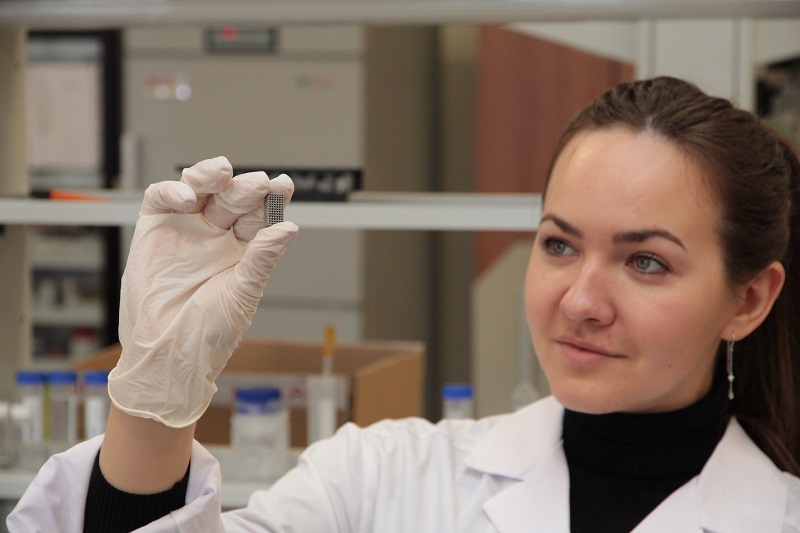 As authors of the development note, today titanium is widely used for manufacturing implants but it is much harder than bone due to different elastic values. When a patient moves, titanium takes more mechanical stress than bones that can cause the destruction of bone tissues.

A Ph.D. student of the School of Nuclear Science & Engineering Roman Chernozem tells: ‘Nanotubes can solve this problem. They seem to grow at the surface of the implant evenly thus forming a kind of border between bone and titanium. Besides, titanium is bioinert, it weakly interacts with biological structures and liquids. In order to survive better, its surface should be changed. For this purpose, we apply nanotubes with various coatings that ‘hide’ an implant under the bone tissue and make it survive more quickly.’

Nanotubes are hollow cylinders of titanium dioxide with a length of several tens nanometers to 8-10 micrometers. They evenly cover the surface of a titanium implant. They can also be synthesized on the surface of other alloys.

To ensure that the patient’s body does not reject modified implants, nanotubes are made identical to the composition of human bones, applying them with coatings out of calcium-phosphate or hydroxyapatite. Calcium and phosphate are the basis of the inorganic phase of bone tissue. Hydroxyapatite that also belongs to the calcium-phosphate class is the mineral basis of bones and teeth.

It is noteworthy, Roman Chernozem was the first in Russia to repeat the experiment of British scientists and to apply hydroxyapatite coating on nanotubes by high-frequency magnetron sputtering. Besides, after conducting the research, TPU scientists and their colleagues first found that hydroxyapatite costings are formed on nanotubes with a lesser diameter (less than 100 nanometers), and if their diameter is increased under the same conditions, a calcium-phosphate coating is formed.

The director of the TPU Technology Center Roman Surmenev explains: ‘Nanotubes allow to monitor the rate of drug delivery to the patient’s body. If they are coated with amorphous calcium phosphate, such coating is dissolved and releases a drug to the body more quickly, e.g. from a week to a month. There are cases when a prolonged effect is needed, for example, a drug should gradually enter the body within a year. Then, titanium dioxide nanotubes can be coated with hydroxyapatite representing the composition of structurally ordered elements. In this case, the coating dissolution rate is lower. In the long term, this technology will provide for more personalized treatment and rehabilitation of each patient through the selection of the exact type of nanotubes for implants that are required in each case.’

For more information, please, refer to the scientific article published in Surface Science (IF 3. 387; Q1).