Scientists from Tomsk Polytechnic University and their German colleagues have revealed in experimental and simulation data that Al and Cu rival the conventionally used materials, Ag and Au, displaying similar enhancement, in particular for surface-enhanced Raman spectroscopy (SERS). The results of the study were published in Sensors and Actuators B: Chemical (IF 5.401; Q1). 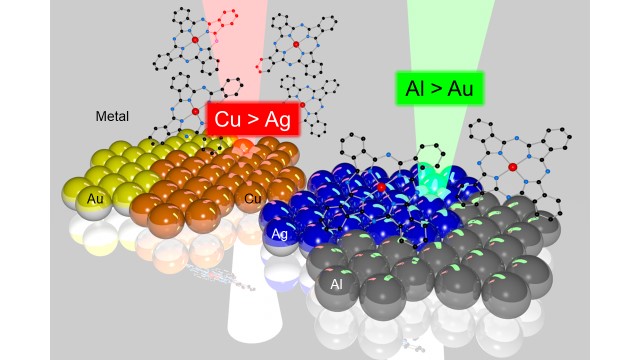 From food industry, materials science, to health care and early cancer diagnosis, the capabilities in ultra-sensitive chemical detection can make the difference between life and death. Raman spectroscopy possesses the unique ability to provide fingerprints of chemical compounds present in a sample, thus allowing improved reliability of diagnostics.

Raman spectroscopy is based on the ability of the systems under test (molecules) to inelastic (Raman) light scattering which makes it possible to identify molecular vibrations. Raman spectroscopy coupling with plasmonics gave rise to surface-enhanced Raman spectroscopy (SERS). The physical principle behind SERS is based on the collective photo-excitation of free electrons in metal nanostructures, the so-called localized surface plasmons (LSP). Plasmons excited in nanoparticles strongly amplify the electric field of the incident and scattered light, especially when resonance conditions are met. This interaction between plasmons and light results in an amplification of the Raman signal.

In their paper the scientists were first to conduct one-to-one comparison among Al and Au, and Cu and Au nanostructures. It is demonstrated that Al and Cu rival the conventionally used materials, Ag and Au, displaying similar enhancement.

‘The problem is a complex structure of metal and a great number of parameters that must be taken into account when carrying out such a comparative analysis. It is necessary to take into account the properties of metal nanostructure that are used for analysis, as well as the location and the properties of the molecules that we detect. In most experiments, all these parameters are difficult to monitor simultaneously,’ explains Prof. Raul Rodrigez from the Research School of Chemistry & Applied Biomedical Sciences. – ‘Currently, substrates are compared based on amplification factor. It shows how much we improved the efficiency of an analysis technique. To calculate it, we need to accurately determine how many molecules were exposed to the effect of amplifying optical signal. In other words, they began to glow brighter.  For this purpose, the estimate of molecules that can’t be verified experimentally are traditionally made.’

After all, not all molecules are exposed to the effect, but only those that get under amplification area, e.g. certain nano-areas on the surface of metals, that are called ‘hot spots’. Thus, it is impossible to say exactly what particular part of molecules was exposed to amplification of optical signal. Because of this, you may fail in calculations and amplification factor will differ from a real one by a hundred or even a thousand times.

‘We maximally monitor all the parameters for various metals: the size of ‘hot spots’ and the number of molecules. Moreover, molecules are deposited on the surface by a ‘dry’ method’ which does not allow them to actively move around the surface,’ describes Raul Rodrigez the technology. A monolayer of polysterole nanospheres is applied on the top of the silicon substrates, then metal is deposited on the obtained nanostructure. The result is a wave metal surface. Further, on that surface, those molecules are deposited that are to be detected. Moreover, they are distributed equally on a substrate of any metal, getting in ‘hot spots’ as well. Next, we illuminate the molecules with the laser and measure the scattered signal emanating from them which we can compare directly, avoiding any unreliable estimates.’ 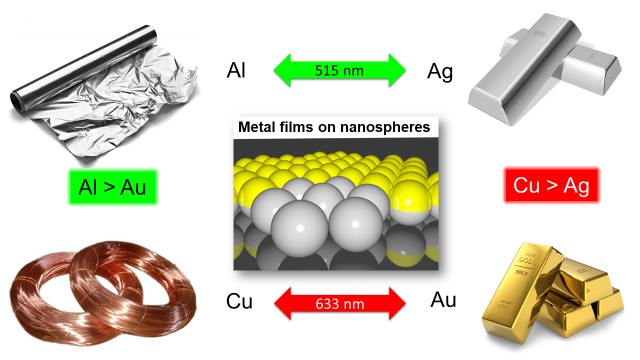 Using this technique to compare copper and gold, aluminum and silver, the scientists have shown that copper and aluminum provide an enhancement that is at least comparable to gold and silver being considered the most sensitive metals. In addition, the sensitivity of such substrates is even higher than that of more expensive commercial ones.

‘Currently, aluminum and copper are widely used in microelectronics due to high conductivity and low cost. All technologies are designed specifically for these metals. We have shown that these materials have great prospects in Raman spectroscopy, that means this technology can be significantly cheaper,’ concludes Raul Rodrigez.