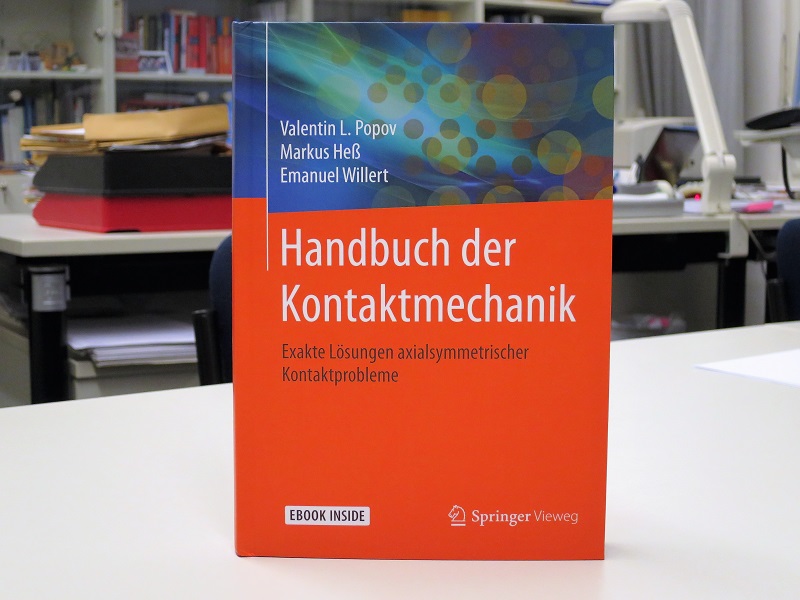 According to Prof Valentin Popov, Emanuel Willert is one of the best participants of the program, who graduated from it with honors in 2014.  In the co-authorship, the scientists published The Handbook on Contact Mechanics (ed. the original German title - Handbuch der Kontaktmechanik) in Springer. The book was published in German, now Emanuel Willert is working on its English edition.

Prof Popov tells: ‘The book contains the solutions to all problems of contact mechanics for axisymmetric bodies over the past 137 years. The solutions are given both for classical profiles, such as sphere, cone or flat cylindrical die, and for many other technical significant forms like truncated cone, rounded-off  cylinder, worn ball, rippled profiles, hollow cylinders, etc.’

In the handbook, normal, tangential and torsion contacts are considered, both with and without adhesion. Materials are elastic isotropic, transversely isotropic, viscoelastic and functional gradient materials.

‘Thanks to the great work and erudition of Emanuel Willert, we were able to give references to the first original publications, so the book may also serve as a kind of ‘a history of contact mechanics,’