On the eve of the Cosmonautics Day, TPU delegation donated to the Cosmonautics Museum (Moscow) a copy of Tomsk-TPU-120 satellite which is the world’s first vehicle based on 3D technologies and state-of-the-art materials. 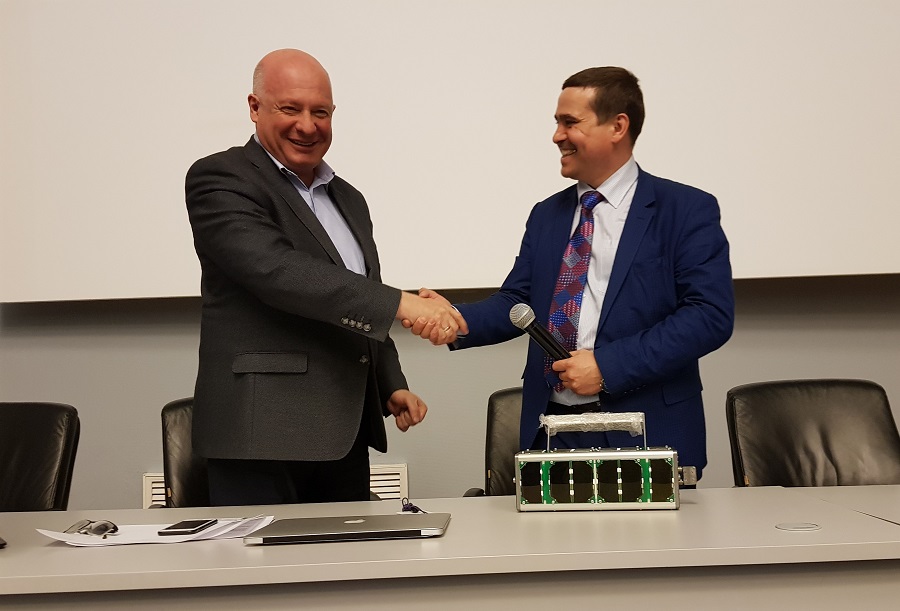 Director of School of Advanced Manufacturing Technology Aleksei Yakovlev noted: ‘On behalf of the designers and creators of the spacecraft including Tomsk Polytechnic University, Rocket and Space Corporation Energia, and the Institute of Strength Physics and Materials Sciences SB RAS we are presenting the operating Tomsk-TPU-120 satellite to the Cosmonautics Museum. We would like it to be kept for history and serve for developing space industry through popularizing space technology and enhancing interest to it. TPU satellite can be used for vocational guidance among young people.’

The satellite was handed over to Deputy Director for Science of the Cosmonautics Museum Vyacheslav Klimentov.

«I am very glad to start cooperation with Tomsk Polytechnic University with gifts,’ thanked Klimentov. ‘For us it is the first university satellite all the more so because it is 3D-printed. Last but not least, it won’t be kept in the storage but in the exhibition showcase of our museum.»

The TPU satellite refers to nanosatellites (CubeSat), has dimensions of 300x100x100 mm, and weighs 3.763 kg. It was the first world's 3D space vehicle. It was delivered onboard the ISS with the Progress MS-02 transport spacecraft in April 2016. In August 2017 Russian cosmonauts Fyodor Yurchikhin and Sergey Ryazanskiy launched it into outer space.

Aleksei Yakovlev emphasized that two fully functional satellites should be produced pursuant to requirements. The one conquers space, the other remains on Earth. It is the second copy of the Tomsk-TPU-120 satellite especially created for the 120th anniversary of the University which was donated to the museum.

‘The museum received a working copy of the satellite and as a flight copy it was tested and certified. Our objective was to monitor the behavior of materials used for 3D-printing the satellite under extreme temperatures on the orbit, i.e. from -150 +150 °C. We needed the materials to withstand these differences in an aggressive environment. As a result, the mission was a success. For several months the CubeSat transmitted about 30 telemetric data to the Student Flight Control Center located at TPU. In addition, the satellite transmitted with a minute break a message devoted to the 120th anniversary of the University which was recorded by our students in 11 languages. The messages were transmitted in the radio amateur band and received in all countries worldwide,’ Alexei Yakovlev told to the museum’s representatives.

The Cosmonautics Museum that is one of the world’s largest science and engineering museums was opened in April 1981 that was devoted to the 20th anniversary of Yuri Gagarin’s space flight. It is located in the stylobate of the monument To Conquerors Of Space in Cosmonauts Alley in VDNH, the Exhibition of Achievements of National Economy (the largest exposition, museum and recreational complex in the world – ed.). The Museum’s fund includes over 96 thousand items of storage. The annual number of visitors exceeds 500 thousand people.