A new class of curved plasmon beams named as a photonic hook plasmon was obtained by researchers from Tomsk Polytechnic University and the Institute of Ultra High-Frequency Semiconductor Electronics of the Russian Academy of Sciences. Due to their small size, they can be used as a nanoparticle manipulator, as well as in biosensors to study substances in small volumes and plasmon microscopes for benefiting superresolution. The findings of the study were published in Annalen der Physik (IF 2.557; Q1). 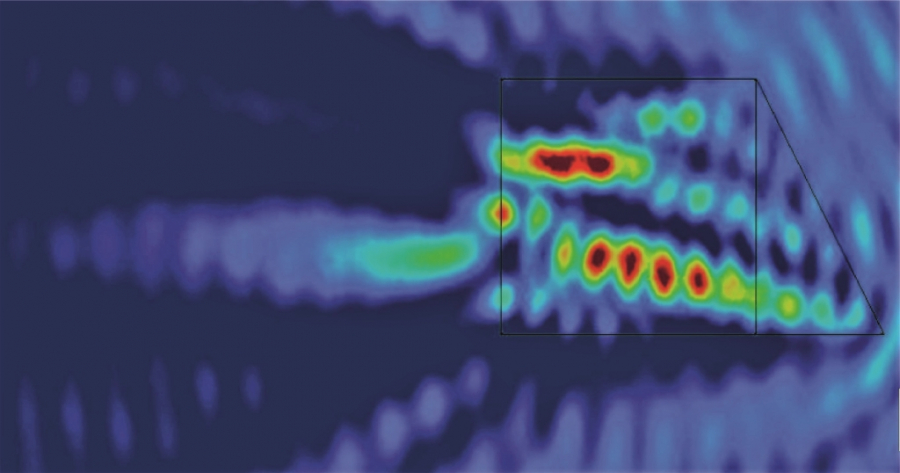 Photo: The formation of the photonic plasmon hook.

A plasmon is a quasi-particle that occurs in solids or near their surface due to electron oscillations. Surface plasmons interact strongly with light; therefore, they determine certain optical properties of metals. Since 2007, scientists have known the only type of curvilinear plasmon waves occurring on the surface of metals, i.e. the Airy rays and their derivatives.

A leader of the project, TPU Professor Igor V. Minin from the Division of Electronic Engineering says:

I should mention that the formation of curvilinear plasmon hooks has so far been possible only on the basis of the Airy family that requires a rather sophisticated and time-consuming method.

We proposed a new class of curved surface plasmon wave, the photonic hook plasmon (PHP), which is fundamentally simpler to generate and has the curvature of beams close to the size of the plasmon wavelength. It is based on the interaction of the surface plasmon wave with a dielectric layer of a special non-symmetric form.’

‘The search of principles to create novel curved beams is an exciting modern field of research that is opening wide fundamental and practical prospects.

In the study, the authors used dielectric particles, e.g. fluoroplastic, with a size of two wavelengths, located on a metal surface. One side of the particle is made in the form of a prism and the second is a square. As the researchers note, particles of different forms can also be used to generate a photonic plasmon hook.

‘A flat plasmon wave falls on the conical part of the dielectric, passes through the particle and on the back, square side a focused curvilinear region appears. In shape, it is similar to a hook.

Earlier, we successfully used this method for photons and now we demonstrated that the method is appropriate to plasmons too,’

The obtained photonic plasmon hook has an important advantage over the Airy rays, i.e. it is much smaller. The curvature of beams is close to the size of the plasmon wavelength, which represents the smallest radius of curvature ever recorded for the SPP beam and makes it possible to use it at the nanoscale.

‘In practice such plasmon beams are of interest for biomedical applications, e.g. for biosensors and the synthesis of advanced materials, devices for optical manipulation, e.g. for switching optical signals, and for obtaining new molecules because the ‘hook’ due to its properties can bring together atoms of different elements and much more.

This area of research is just in the very beginning of its long journey,’ says the scientist.