Scientists from Tomsk Polytechnic University were the first to synthesize polymers at room temperature under sunlight conditions, although normally this process runs at high temperature. They used surface plasmon polaritons (SPPs) as a ‘trigger’ for a new type of reactions. The study results were published in the Journal of Material Chemistry A (IF: 9.931; Q1), the article was also included in the 2019 top publications of the journal. The new concept of polymerization has already been tested at the synthesis of ‘smart’ or functional polymers whose properties are possible to model at the obtaining stage. 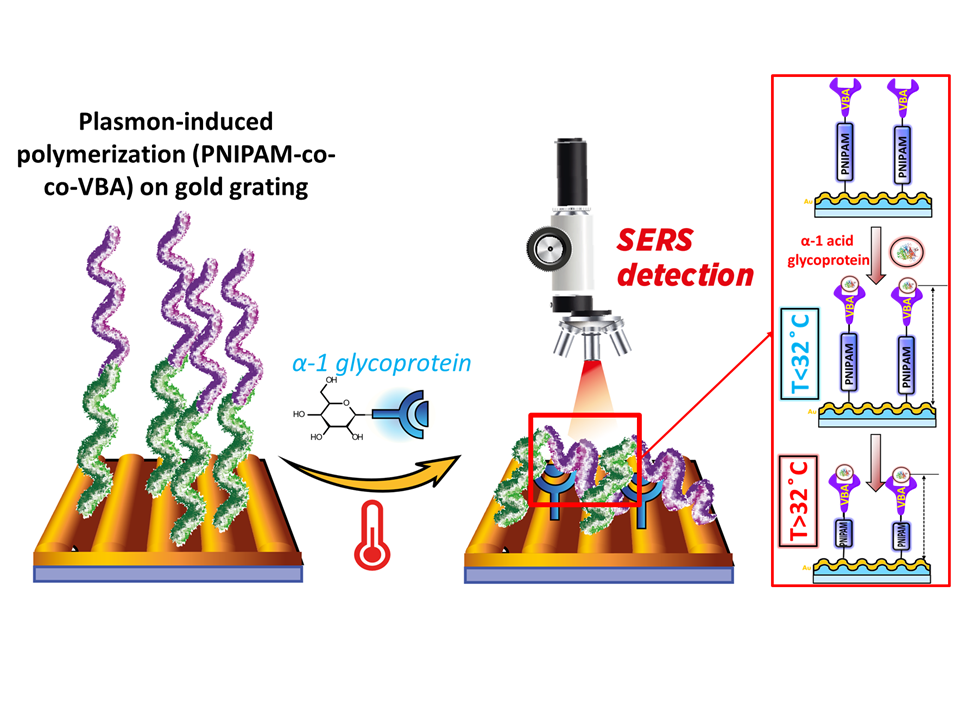 Photo: Schematic diagram of the polymerization

‘From the global point of view, we address the application of new energy sources for implementing chemical reactions. Many catalytic processes run at extremely high temperatures. At the industrial scale, these require enormous energy consumption.

That is why we are challenged to reduce the temperature of reactions and to develop fundamentally new methods of energy supply to chemical reactions. In this regard, scientists pay special attention to light because it is a ‘green’ and eco-friendly source of energy,’

Traditionally, the synthesis of polymers runs at a temperature of about 150 °C. On the one hand, it entails energy costs, on the other hand, not all polymers with interesting properties and of required quality can be obtained under such conditions.

To overcome such challenges the authors used plasmon polaritons. They occur near the surface of solids due to electron oscillations. Indeed, they convert light energy and thanks to this property, they trigger polymerization.

‘These particles allow us to carry out previously impossible things, which particularly implies carrying out reactions at room temperature under light exposure, i.e. laser or sunlight.

In the article, we have demonstrated the opportunity to carry out controlled nitroxide-mediated polymerization (NMP). However, the exact operational mechanism of plasmon polaritons is not yet known. This is the next challenge for our research team and other scientists,’

During the study, the scientists synthesized polymers on the surface of thin gold plates the maximum thickness of which is 20 nanometers. The surface of the plates is wave-structured. Due to this structure, the plates efficiently trigger plasmon polaritons. As a catalyst, the researchers ‘planted’ alkoxyamine molecules on the plate with N-isopropylacrylamide (NIPAM) monomer to be used as a building material. Then the plate was exposed to laser or natural sunlight – the experiments were conducted outdoors on sunny days. When exposed to light, a PNIPAM polymer chain was synthesized from the monomer. Then on this chain, the second polymer pVBA (a polymer based on 4-vinylbenzene boronic acid) was grown out of the monomer.

Both the polymers belong to the functional class, i.e. they have certain properties that chemists can set and use. For example, PNIPAM becomes insoluble in water at the temperature above 32°. Scientists use this property when making forms for the creation of artificial vasculature. These forms are easy to remove by simply cooling PNIPAM.

‘It is interesting that under sunlight exposure synthesizing was much in the same way as under laser exposure,’ says Pavel Postnikov. ‘Meantime, the structure obtained out of the gold plate and a functional polymer on its surface can be a very sensitive sensor itself. During the experiment, this sensor was used to capture various biological markers out of model solutions. The sensor turned to be very sensitive, it captured a necessary substance literally in trace amounts.’

According to him, now the scientists presented the study outcomes at the laboratory scale. In the long term, the discovered processes can make polymer production more energy efficient, help scientists to create new polymers with useful properties and supersensitive sensors for biological research.