Researchers from Tomsk Polytechnic University and their colleagues from the Karlsruhe Institute of Technology (Germany) have presented the world’s first-ever software Quanfima for 3D visualization and analysis of biomaterials that can promote regenerative processes. The software allows scientists around the world to perfect this process. The study results were published in the journal PLoS One. 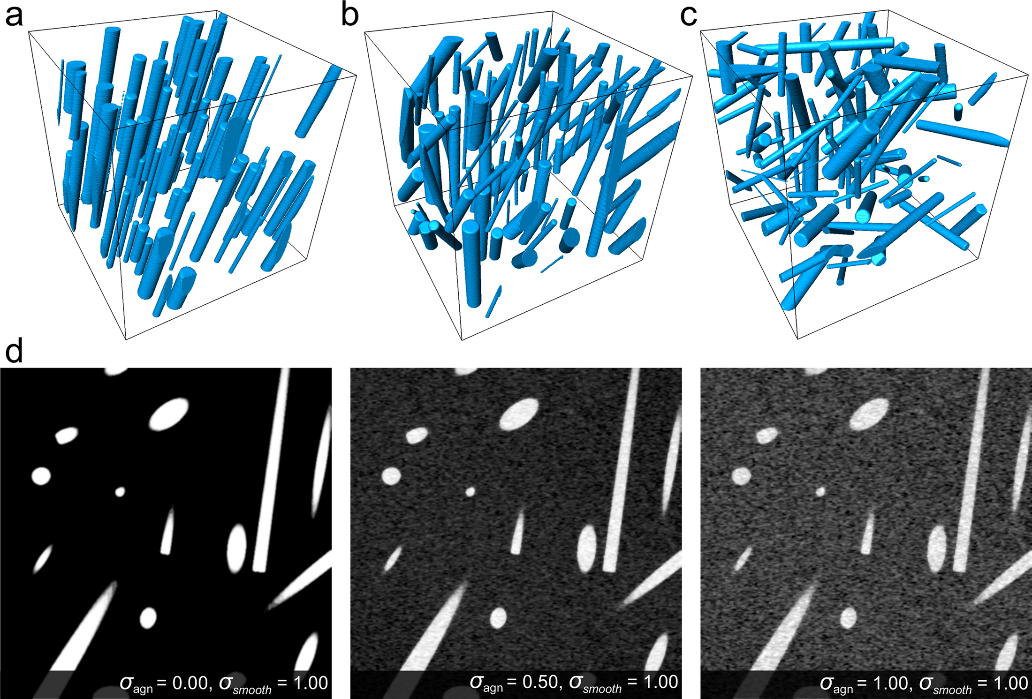 Photo: The generated datasets with different fiber configurations: a) aligned (A); b) moderately aligned (M); c) disordered (D);
d) the central slice from the YZ-plane of generated disordered dataset contaminated with additive Gaussian noise and smeared with the Gaussian filter

All the activities were implemented by an international research team. Thus, Roman Shkarin, a research fellow at the Karlsruhe Institute of Technology, developed a new Python package, whereas TPU scientists provided the samples of polymer scaffold and hybrid scaffold.

Roman Surmenev, the Director of TPU Research Center for Physical Materials Science and Composite Materials and the co-author of the study, said:

‘The need to develop such software was attributed to the lack of programming products for 3D fiber analysis. A number of foreign research teams use commercial products with similar features but they are not freely available.’

According to the scientist, composite 3D scaffolds (materials with different fibrous structure and inclusions) contribute to tissue regeneration. They are placed into damaged tissues or organs, for example, bone fractures where they become scaffolds for new cells.

Visualization methods have already existed for scaffold analysis but their 3D modeling is still a challenge due to the various diameter of fibers (from micro- to nanoscale) and their composition. The new open-access software will fix the process.

‘The new Python package Quanfima (Quantitative Analysis of Fibrous Materials) has already been rolled out and is available to download. Our software simplifies 3D visualization and statistical analysis of fibrous materials. It has a user-friendly interface and can perform both 2D and 3D analysis of data, which sets it apart from its counterparts,’

The scientists have already tested the software to analyze X-ray tomography datasets.

‘Outcomes obtained demonstrated that the developed product can help other scientists who conduct similar research to analyze the fibrous structure of any scaffolds, including hybrids,’ emphasized the scientist.

The developers are planning the further improvement of the software by expanding its features.