Under the supervision of Sergey Arbuzov, professor of the Division for Geology, TPU research team is studying the mineralogical and geochemical features of complex mineralization in the bed XI in the south and north of Kuzbass, where ashes from volcanoes of Mongolia have been found. The team identifies new rare-metal coal deposits to increase the raw material base of strategic metals and reveal the Earth’s history at the time of their formation. The research is published in the journal Ore Geology Review.

Photo: A fragment of the geological map of the south Kuzbass area and the location of testing areas of layer XI

According to Sergey Arbuzov, coal is a contrasting geochemical barrier for the accumulation of various chemical elements. Consequently, coal is favorable for the formation of geochemical anomalies with the precipitation of many metals in coal seams. For more than 100?years the issue of extracting by-product impurities from coal and its utilization wastes is being addressed with mixed success. Nowadays, a large group of diverse deposits of rare, noble, and nonferrous metals in coals and carbonaceous rocks is known. Only germanium has been commercially extracted from coal, but more recently, lithium and gallium have been mined.

“General trends of increasing demand for rare metals and developing new processing technologies allow us to be optimistic about the prospects for the development of traditional and new types of rare-metal coal deposits. Attempts to explore new deposits are continuing. In addition to the group of germanium-coal deposits in China, several deposits of complex ores have been identified in recent years. Similar rare-metal-coal deposits have been known in Kuznetsk Basin (Kuzbass) and Minusinsky Basin,

The mineralization in the seam XI in the Kuznetsk Basin is of particular interest because of the element concentrations and the scale of the enrichment. The nature of this type of complex mineralization is interpreted in different ways: from syngenetic hydrogenic mineralization to volcanogenic and volcanogenic-hydrothermal. Insight of the mechanisms of the formation of such ores and modeling their formation will aid effective prediction and reveal similar mineralization in previously unexploited areas.”

The testing was carried out in open cut and underground mines from 1989 to 2018. In total, 12 cross-section intervals have been tested, two of them at the mine named after L.D. Shevyakov, seven - the mine named aft. V.I. Lenin, one in each of the rest mines. The most detailed interval was made at the Raspadsky open cut mine. 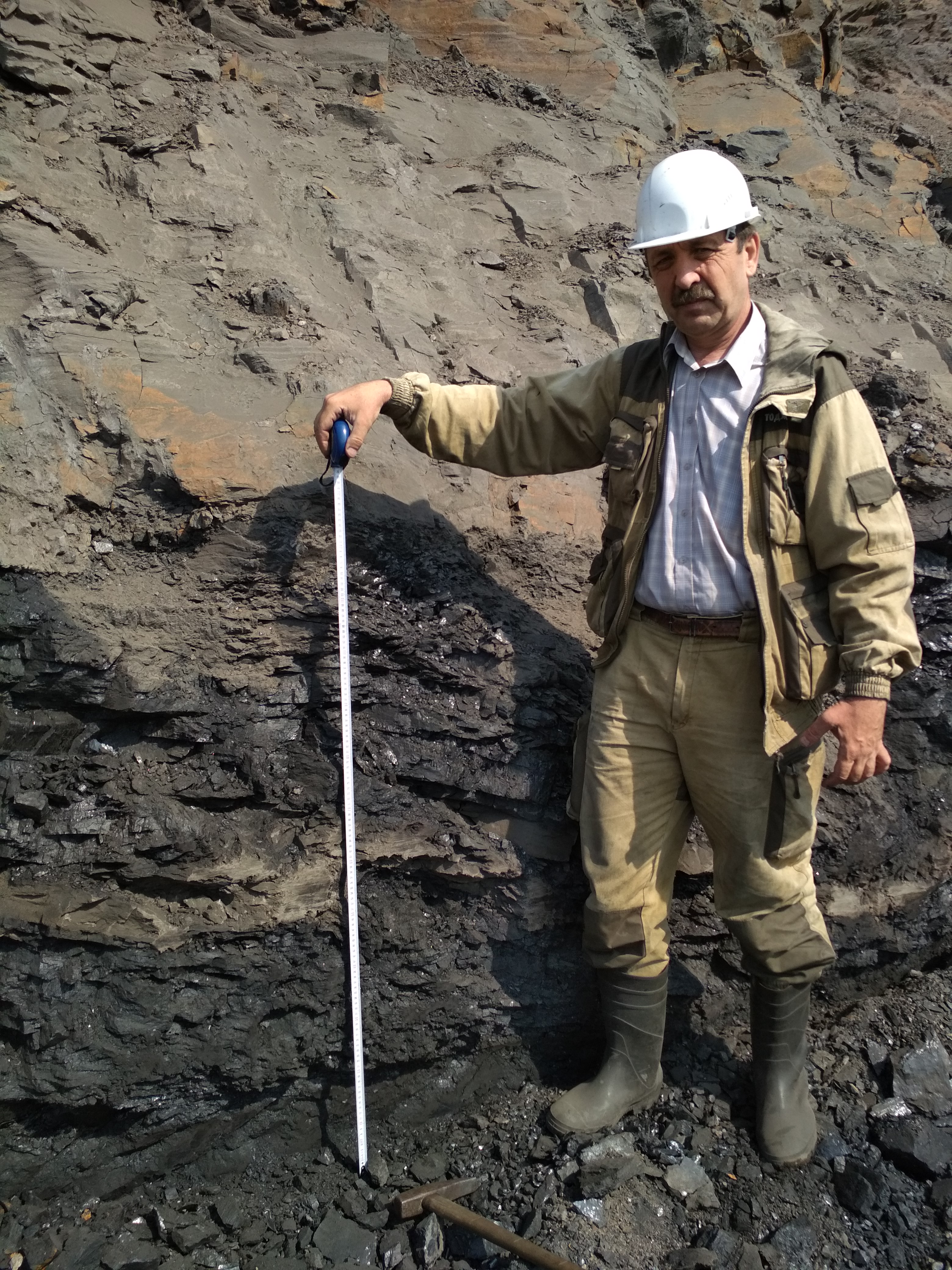 Photo:  Sergey Arbuzov during testing of a coal seam XI

“Previously, coals used to be ancient peat, which under the influence of overlying strata gradually turned into what we now see in Kuzbass. We consider the whole chain: from modern peat, through brown coal, to coal. We sampled the ashes to find out the way it behaves in the basin after hundreds of millions of years,” - says the researcher.

The coals of seam XI are polymetallic ores of Nb-Ta-Zr-Hf-Y-REE-Ga composition. The concentration of these metals in the seam XI make it a medium-resource deposit.

The studies allow us to develop a set of search criteria to identify mineralization of this type. A characteristic feature of such ores is the presence of a horizon of volcanogenic pyroclastic rocks of alkaline composition with increased radioactivity. The presence of such a horizon was noted in similar ores in China and the coals of the Minusinsky Basin. This feature allows such horizons to be identified by gamma-ray logging at an early stage in coalfield exploration.

The connection of complex Nb-Ta-Zr-Hf-Y-REE-Ga mineralization with alkaline volcanogenic pyroclastics significantly expands the prospects of further similar discoveries in coals of East and Central Asia. The high volcanic activity of this period coupled with the alkaline magmatism contributed to the formation of metal-bearing ash horizons and when buried in paleo-bogs, complex rare-metal-coal deposits were formed. The disparate locations of known ores in the vast territory of China and Russia suggest that several other such deposits may be discovered by systematic studying sedimentary basins of this age. Thus, our study allows us to identify new rare-metal coal deposits to increase the raw material base of strategically important metals. These deposits can help discover the Earth’s history at the time of their formation, ” Sergey Arbuzov notes.

This year, the team will continue their research due to funding of the Russian Science Foundation. Currently, the scientists are studying ashes in the north of the Kuzbass basin.

"We are trying to find the layer XI in the north of Kuzbass. According to my assumption, once there was a powerful catastrophic volcano eruption, and ashes settled in the Kuzbass and Minusinsk basins, where it was founded. The Siberian territory was covered with 5-20 cm of ashes. We have proved that these ashes are in the south, now we are trying to prove that it is in the north. It came from Mongolia, where we studied late-Carboniferous coal layers. There were many volcanoes, which often erupted, and their ashes flew and reached long distances, then fell into peat,

We know that what got into peat remains there, the same works with coal. There is transformation, elements are redistributed by aggressive peat waters - these waters are so aggressive that they can decompose even a mineral-like zircon - one of the strongest minerals in terms of chemistry. However, if the conditions for removal are unfavorable the elements can form a mineral form. All this we are exploring. Our work proves that the source of rare elements in the studied coals is volcanic ash. It also allows establishing the behavior of individual chemical elements in a paleo-bogs environment. "