Scientists of Tomsk Polytechnic University jointly with partners from the Czech Republic and France designed extremely sensitive sensors for free oxygen-containing radicals that are able to disrupt cell function. According to the researchers, these sensors are an alternative to traditional analytical chemical methods of analysis. The laboratory tests demonstrated that its sensitivity is by four orders of magnitude higher. This was achieved due to the effect of surface plasmon resonance in combination with "traps" of organic compounds. The results are published in Sensors and Actuators B: Chemical (IF: 6.393; Q1). 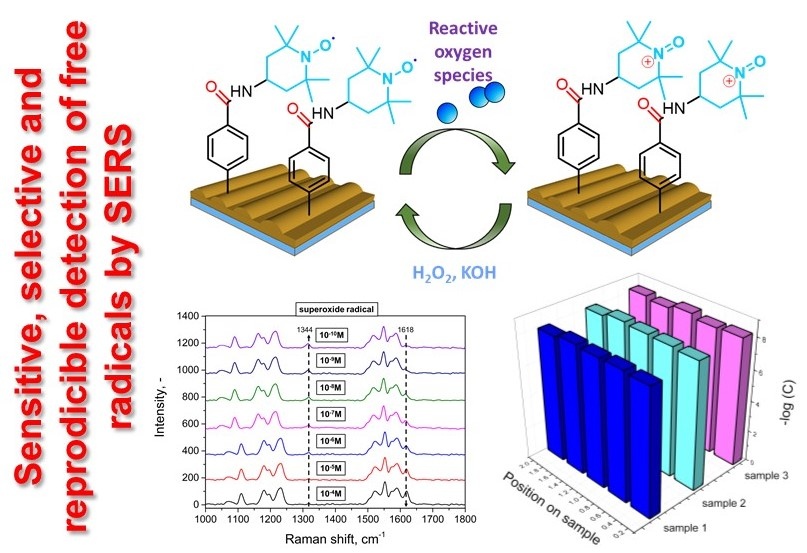 Free radicals are reactive oxygen species with a very powerful oxidizing ability. Typically, they tend to be a kind of by-products of the respiratory chain. The main such free radical is the superoxide radical (O2 · -). It is not dangerous by itself, but in the process of chemical transformations, it easily passes into other compounds with strong oxidizing properties. They damage proteins, nucleic acids, and lipids of cell membranes.

“Therefore, in medical research, it is important to detect radicals in biological objects to timely identify incipient changes in organs, tissues and take appropriate measures.

The classical methods of analytical chemistry allow detecting radicals in concentrations up to 10-6. We proposed a minimum detectable concentration of 10-10. Accordingly, it is more sensitive by four orders of magnitude. By the standards of chemists, this is a big step.

Our sensors differ from others by the action, based on the effect of surface plasmon resonance, ” Olga Guselnikova says, engineer at the TPU Research School of Chemistry & Applied Biomedical Sciences.

The sensors are an example of a hybrid material that combines inorganic and organic elements. Their base is a thin gold plate with a wavy surface. Organic compounds that are planted on it act as traps for free radicals. The wavy surface of the plate effectively excites the effect of surface plasmon resonance. It makes the sensors extremely sensitive due to the effect of giant Raman scattering.

“The organic component is a compound with a short name TEMPO. It is a simple and affordable model compound used in other methods, but it has never been combined with plasmon-active substrates. This combination of plasmon effect and chemical characteristics of TEMPO gave us the expected effect,” the scientist explains.

In the future, the researchers intend to use the sensors to detect nitrogen-containing and halogen-free free radicals and conduct experiments closer to real biological objects. “In the Czech Republic, we are also negotiating with representatives of the food industry. After all, free radicals are markers of the fact that products, particularly meat, have deteriorated or are close to this.

We want to test our sensors on food",

The studies are carried out in collaboration with the University of Chemistry and Technology of Prague (Czech Republic) and Aix-Marseille University (France). The project was supported by grants from the Czech Science Foundation and the TPU Competitiveness Enhancement Program.