The student teams from six Tomsk universities presented their concepts of a new inter-university campus at the UNI4CITY international student platform. The teams made up of the TPU students proposed the concepts of Science Star, the use of the TPU nuclear reactor for heating, the construction of greenhouses, monorail, and much more. 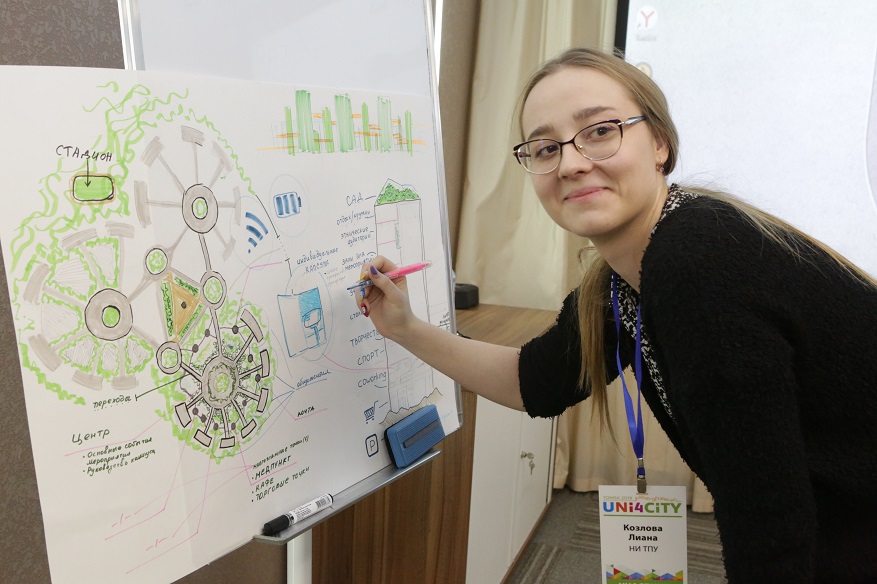 The UNI4CITY platform is a part of the IV International Forum of University Cities – City-University: Globality vs Locality, which is currently being held in Tomsk. The main topic of the platform was the creation of an inter-university campus in Tomsk through smart city technologies. The students were involved in the discussion of urban planning issues and creation of urban spaces together with the experts, public authorities, academic and professional communities. They were studying the models of European smart cities, dynamics of knowledge about a human-oriented smart city – Co-creation of EU Human Smart Cities (CoHuSC).

“There were nine interdisciplinary teams, including the representatives of six Tomsk universities to bring together the widest possible audience, embodying the inhabitants of this campus, young researchers, and international students.

Due to their competencies and interests, the participants chose one of the three cases. The first case dealt with the ways to attract academic staff and young talents to fulfill research and engineering potential of scientists. The second was related to infrastructure solutions, architecture, transport, technologies for constructing new campus buildings and providing them with energy. The third included discussions over the campus potential for living, studying, leisure, and whether it can become a driver for the territory development,” Natalya Goncharova, coordinator of the Platform and the head of the CoHuSC project, says.

The student teams were to come up with the ideas of an inter-university multifunctional student campus to be either a research and innovative center to attract over 15,000 young researchers, developers, and infrastructure solutions, or the point for the six Tomsk universities, or the space for life, meetings, leisure, or the driver for territory development. The ideas were presented to the expert jury that consisted of the representatives of the administration, business, and universities.

Thus, the students of one of the teams were discussing the issues that complicated their research activity. 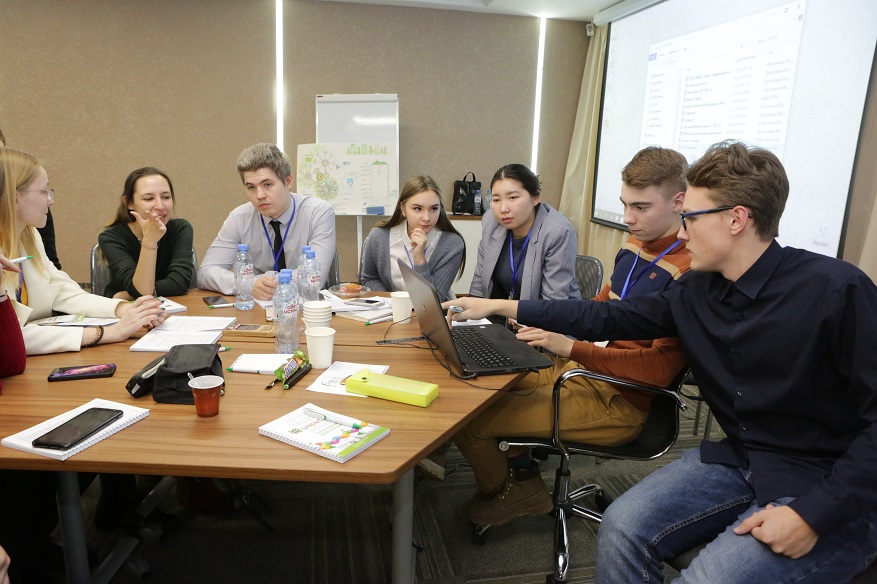 Based on these, they proposed a single e-library for all universities, a single database of e-books, and a testing ground. Another vision was to utilize the research nuclear reactor for both research projects and heating and lighting of the campus, and an engineering center – for multidisciplinary teams to discuss their ideas. They also proposed to establish a 24/7 learning space with free access to research and academic rooms, access to lectures, and so on.

International students also did their bit.

There were other interesting solutions, for instance, the construction of a monorail – a web-like infrastructure including capsules for individual work and leisure, retail outlets, a post office, a free Wi-Fi network, medical posts, coworking spaces, and under- and overpasses. In addition, the students thought of the transport issues and autonomy of the territory. 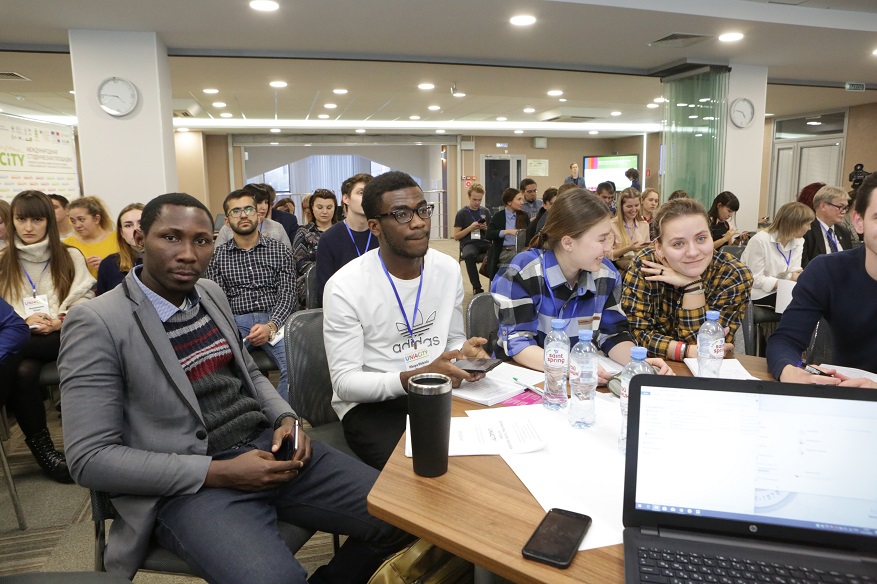 “We decided to minimize street noise and gas pollution by leaving cars at the campus entrance in an underground parking space. You can use electric cars to move around the campus. Another important element is autonomy. The campus comprises greenhouses for vegetables and fruits that can be used in canteens or sold in retail outlets,” - Igor Volkov, the TPU student and participants of one of the teams, says.

Having heard all the ideas, the experts asked students a number of questions and gave pieces of advice to improve their projects. The revised concepts will be further presented to the Tomsk governor and by the forum end, they should be polished and finalized.

“The inter-university campus is an outside-the-box project requiring original interdisciplinary solutions. The students propose interesting solutions like using alternative energy sources alone and original views on the use of existing infrastructure, for instance, the research reactor.

However, this event was held to engage inter-university teams of students to design the new campus where they will live. Upon signing of an agreement on the campus creation, the Ministry of Science and Higher Education asked to involve students in the design of the inter-university campus in such a unique student city. We gave them this opportunity. Their ideas can be taken into account for designing the campus,” Lilia Kiryanova, the TPU Vice-Rector for External Affairs and the Platform chief expert, says. 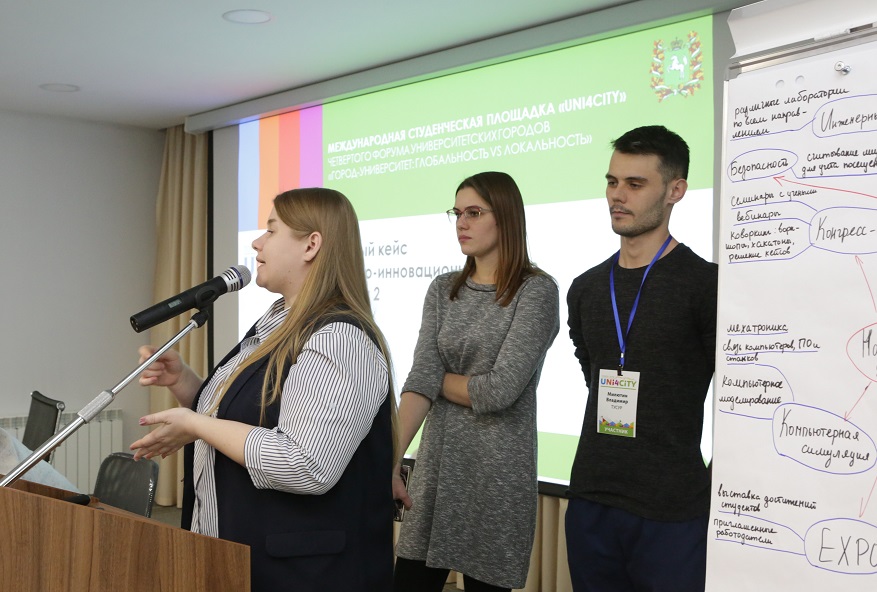