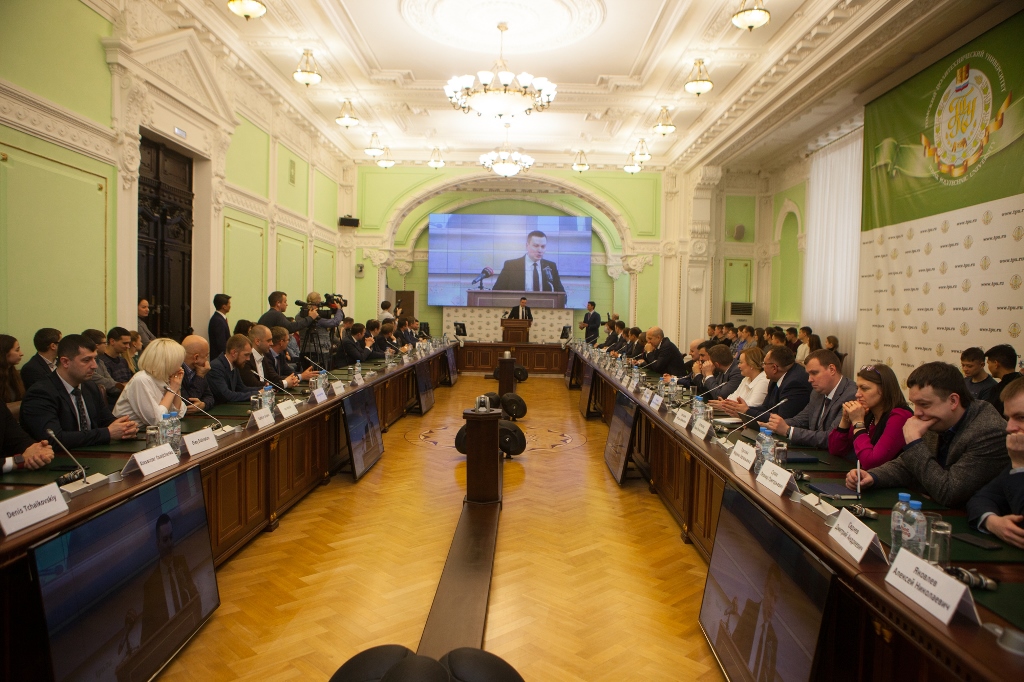 “We have excellent developments in non-destructive testing, flexible production, new materials, including technologies for the Arctic research, smart chemistry, biodegradable polymers, AI, and advanced power industry. As we speak, in the north of the Tomsk Region, Gazprom Neft-Vostok has launched its facilities to reduce the negative impact on the environment.

In this and other ongoing projects with industrial partners, TPU acts as a resource support center,” Andrei Yakovlev, TPU First Vice-Rector, says.

Top managers of the university and the companies discussed one of such projects, Paleozoic, dedicated to the development of technologies for exploration and production of hard-to-recover oil. In this project, TPU is working on three of six research fields, such as tectonics, potential field methods, and geochemistry.

“Currently, 48 percent of the produced oil is from the hard-to-recover reserves of the Paleozoic deposits. Taking into account the scale of Paleozoic deposits in the Tomsk Region, this proportion can be significantly increased. Therefore, we invite scientists to cooperate,” Konstantin Karabadzhak, Director-General of Gazprom Neft-Vostok, says.

In the field of training engineers, Heriot-Watt, a center for training and retraining of petroleum industry specialists, was presented at the meeting as a successful practice. There are three programs provided: Petroleum Industry, Development and Operation of Oil and Gas Fields, and Assessment and Management of Petroleum Reservoirs. Young specialiststrained in Tomsk according to the educational standards of Heriot-Watt University receive a British Master degree upon graduation.

“TPU trains specialists for many companies. Two months after they come to the university, they know where they will work. Graduates of leading Russian universities want to study at Heriot-Watt center so they have to pass a serious admission contest,” Andrei Yakovlev adds.

About 1,000 people have graduated from the Heriot-Watt Center since its opening in 2011. About 200 of them work in PJSC Gazprom Neft. Aleksey Vashkevich, one of the center graduates and Director-General of the Gazprom Neft Science and Technology Centerwas awarded the TPU Honorary Graduate Medal at the meeting.

TPU performed R&D projects for industrial partners for about 1 billion roubles (3d place among Russian universities). The total amount of R&D in 2019 is almost 2 billion roubles.

In 2019, over 500 Russian and international enterprises provided 3,000 jobs for TPU graduates. More than 80% of graduates tend to know where they will work by the time they graduate.

All TPU engineering schools have councils of industrial partners, which participate in the development and upgrading of educational programs.

St. Petersburg Polytechnic University and Tomsk Polytechnic University to develop educational competencies as a part of National Technology Initiative
TPU Projects to Be Integrated into REC Program Promoted in the Tomsk Region
Graduate of Space Materials Program of TPU and RSC Energia: This is Like a Demo of Life
Partners of Big Tomsk University Create a Single E-Learning Platform and Prepare for Admissions
TPU scientists to study the ways space conditions effect the ISS new module