A team of scientists from Tomsk Polytechnic University and Institute for Integrative Nanosciences, Leibniz Institute for Solid State and Materials Research (IFW Dresden), headed by Prof. Vladimir Fomin have found new and unusual properties of superconducting materials exemplified by niobium. The research has proven that the mentioned properties depend on a sample’s geometry. The scientists studied niobium in the form of an ultra-thin film rolled into a micron diameter tube (editor's note: human hair is 100 micron thick). The research outcomes are published in Communications Physics Journal (IF: 4,664; Q1), which is a part of an internationally recognised base The Nature Research Journals: https://www.nature.com/articles/s42005-020-00411-4
Superconductors are materials capable of conducting electricity with no resistance. Superconductivity is regarded as one of the most significant discoveries of the 20th century. Nowadays prototypes of quantum computer rely on superconducting element for storing data. Additionally, superconductors are used for creating a powerful magnetic field in such projects as International Thermonuclear Experimental Reactor (ITER). 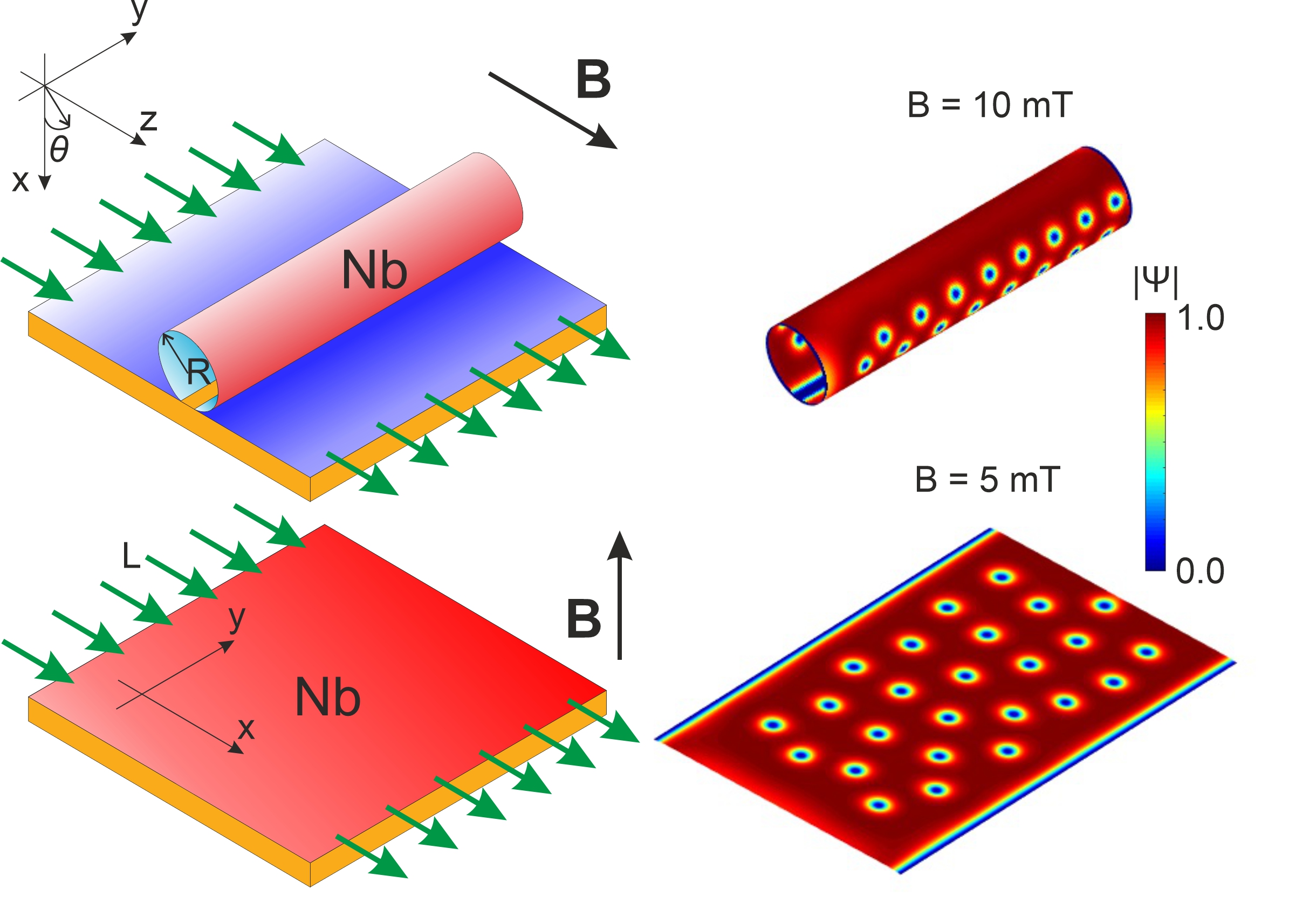 “This work is fundamental. We applied speculative and numerical methods to study the properties that change in the rolled material and found a range of sizes effecting a superconducting microtube in a way that it behaves completely differently in comparison with a similar unrolled planar film”

The scientists studied the tubes with a diameter less than 1 micron. Such tubes are regarded as self-organized rolled structures.

“They have been created relatively recently, particularly, in the Institute for Integrative Nanosciences headed by Prof. Oliver Schmidt. They are advantageous due to the opportunity to control material properties by altering its size. Currently, it is still rather difficult to create a high quality dimensionally homogeneous tube of a similar size. Thus, we needed a tool for simulating material properties with regards to a new geometry. With such simulation, we could find proper sizes for self-organized rolled structures that showed new and interesting properties. In particular we were interested in the way a superconductor behaves when passing an electric current in a magnetic field,” Roman Rezaev says.

The scientists applied a computer platform developed to simulate superconducting structures. The calculations were performed on the basis of a supercomputer of Dresden University of Technology.
“We developed a computer simulation technique including sample geometry and the following physical conditions of an experiment: a magnetic field and electric current. Thereafter, we applied it to niobium thoroughly studied in a two-dimensional geometry as a superconductor. However, an electric power surge (‘peak’) occurs in a definite range of magnetic field values when electric current flows through a niobium tube in a magnetic field,” says Ekaterina Smirnova, a Research Professor of Institute for Integrative Nanosciences.

This surge is due to sudden zones in a tube in which a material loses its superconducting properties.

“A possible loss of superconducting properties in some parts of a sample is a renowned effect. Once appeared in two-dimensional structure, such zones tend to increase with the growth of a magnetic field and entirely capture the material.

However, self-organized rolled tubes are characterized by an unusual effect, specifically, these zones disappear with the growth of a magnetic field and the material completely regains its superconducting properties,” Roman Rezaev clarifies.

In the future the scientists aim to confirm the obtained results experimentally.

“We have demonstrated the fundamental possibility provided by simulation for searching new material properties in a specific geometry. An experimental research method in this case is to be supported by a substantial and promising numerical experiment,” the scientist adds.