Young TPU scientists have returned from a 40-day international Arctic expedition aboard the research vessel “Akademik Mstislav Keldysh” to the Eastern Arctic seas. They studied the mineral and geochemical specificity of sediments and formation mechanisms of water chemistry in the Arctic seas, carried out radioisotopic studies to identify subpermafrost groundwater discharge, explored the particularities of organic matter molecular composition in the methane emission areas. 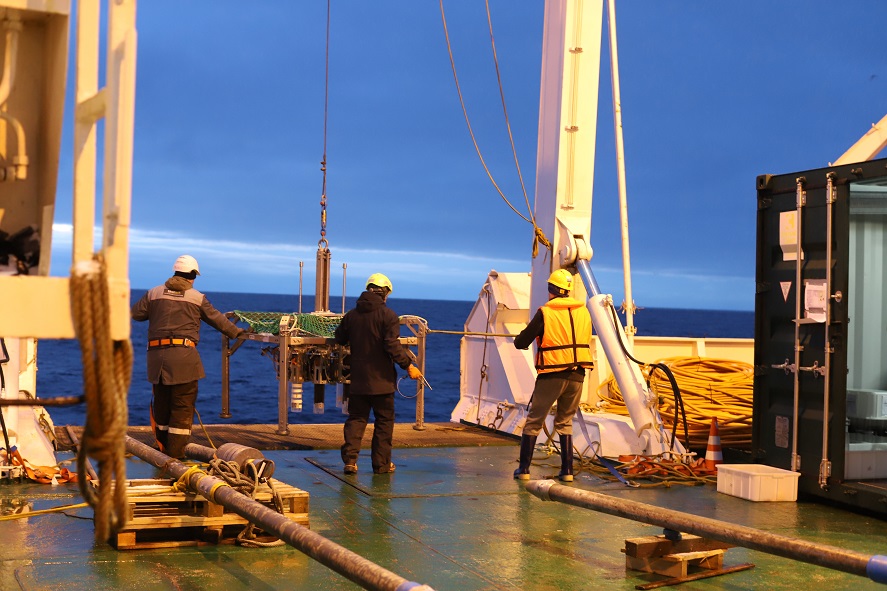 Tomsk Polytechnic University research team consisted of Alexey Ruban, Yulia Moiseeva, Daria Purgina, Daria Vorobyova, Elena Vorozheikina, Sergey Plastun, and Elizaveta Klevantseva. According to Alexey Ruban, the associate professor of Division for Geology, one of the most important tasks was the sediments investigation. The researchers obtained the samples using special equipment — a multicorer, designed to collect undisturbed sediment samples. The samples are collected in the form of test cores using plastic tubes pushed into the sea floor. Using this method, researchers obtain cylindrical samples up to 5.5 meters long from the sea depths from 12 to 500 meters.

There were 55 test cores collected. Besides, they included about 1 000 – 1 500 samples, as each sample is cut by layers of 1 cm. Each layer contains information on the deposition environment at a certain stage of the geological area development. The samples were separated and frozen aboard the research vessel. Now, TPU researchers are going to study them by layers in the laboratories.

The samples were mostly collected in the areas of the Laptev Sea and the East Siberian Sea where methane is released from the bottom into the water layer.

“These are localized areas, which makes it quite difficult to accurately get a multicore or clamshell bucket into the exact place of methane release. During this expedition, for the first time, we managed to obtain samples directly from the cold methane seep near the Lena River delta. The seep was discovered more than ten years ago, but till now methane seep has been impossible to sample in this area,"

The samples of methane seep sediments are visually different from other sediments first of all by rich black color and pronounced smell of hydrogen sulfide, which is the consequence of anaerobic oxidation of methane and bacterial sulfate reduction processes.

“Specific authigenic minerals, for instance, magnesian calcite, framboidal pyrite, gypsum, and others form in these sediments. Studying the isotopic composition of carbon in carbonates, we can understand what type of methane (thermogenic, biogenous, or its mixture) was involved in its formation and evaluate its origins.

Since the activity of cold methane seeps is characterized by temporal variability, the presence of carbonate and sulfide mineral assemblage may be an indirect indicator that methane discharge took place in this area in the past. Thus, studying the mineral and geochemical composition of the sediments selected beyond the active seeps, as well as the rocks of ancient sedimentary basins, we can see the markers of methane discharge,” the researcher says.

The sample tests will include the study of authigenic (formed exactly in the sediments) and terrigenic (brought into the sediments from land) minerals, along with the chemical composition of the sediments, including the high or low concentration of geochemical elements.

“For instance, the sediments affected by methane tend to have a high concentration of molybdenum. Due to this feature we also will be able to identify currently inactive methane yield areas,” TPU associate professor notes.

The expedition, the TPU researchers participated in, was devoted to researching biochemical, biological, and geodesic consequences of underground and water permafrost degradation in the Russian Arctic territory. The main goal of the expedition, headed by Igor Semiletov, TPU professor, the head of the Arctic research laboratory of Pacific Oceanological Institute of the Far Eastern Branch of the Russian Academy of Sciences, Corresponding Member of the Russian Academy of Sciences, was to study the imbalance in the carbon cycle and freshwater runoff in the Arctic Seas as the main drivers of the climate system.

The expedition gathered together the researchers from the marine institutes of the Russian Academy of Sciences, top Russian universities, including TPU, and Stockholm University, 69 scientists from ten countries in total.

The TPU professor Igor Semiletov conducts a large-scale scientific project “The Siberian Arctic Shelf as a Source of Greenhouse Gases of Planetary Significance: Quantitative Assessment of Flows and Identification of Potential Environmental and Climatic Consequences”. The project was supported by the grants of the government of the Russian Federation and the Russian Science Foundation.

The main theory of the scientists assumes that underwater permafrost melting causes large emissions of greenhouse gas methane into the Earth`s atmosphere. These emissions may have a significant impact on the global climate changes. To confirm this theory, several complex expeditions to the Russian Arctic seas were arranged.

The previous expedition took place in October 2019. The scientists worked for 35 days aboard the research vessel “Akademik Mstislav Keldysh” in the Eastern Arctic seas. The expedition discovered a major methane emission. The total area of the gas blowout was from four to five square meters.