On July 5, the Governor of Tomsk Region, Chairman of the Supervisory Board of Tomsk Polytechnic University Sergey Zhvachkin and the Minister of Science and Higher Education of Russia Valery Falkov introduced the Acting Rector at the university's Academic Council. It is Dmitry Sednev, the head of TPU Engineering School of Non-Destructive Testing and Safety, who was appointed as the Acting Rector. 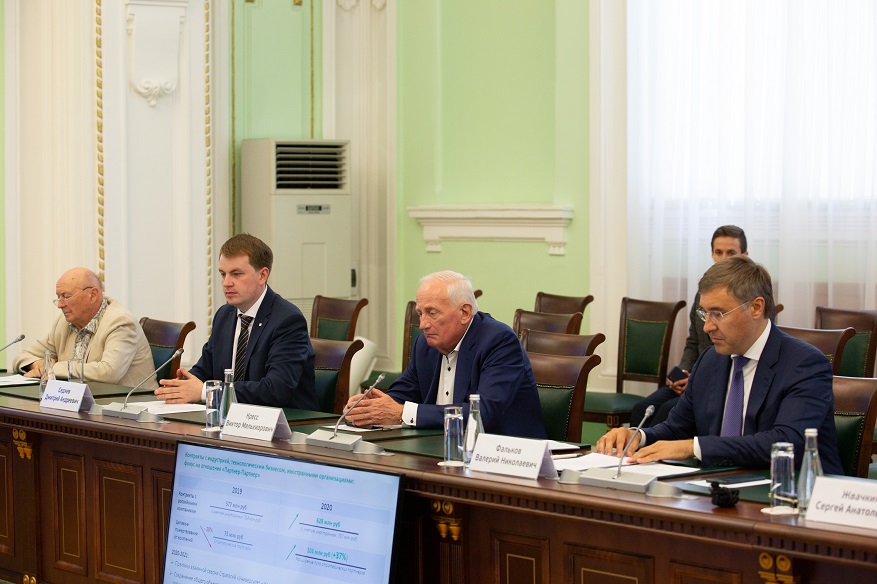 Dmitry Sednev will enter upon his duties on July 6, 2021.

Dmitry Andreevich is a TPU person. The university educated him and brought him up. Hence, I expect a constructive and honest dialogue between the new head and the university's structural units, its students and everyone who contributes to the prosperity of Tomsk Polytechnic University,"

commented Valery Falkov on the appointment.

At the Academic Council, the Governor of Tomsk Region and the head of TPU Supervisory Board expressed the key challenge for the university – to remain one of the drivers of the scientific and educational complex of Russia and our region.

"For this purpose, it is important to intensify work in the key areas of the Strategy for Scientific and Technological Development of Russia, cooperate even more extensively with industrial partners, continue further integration with other universities and academic institutions, first of all, in the format of the Big University project as part of joint research projects, and to develop education export. It is not conceivable without the support of the unique faculty, because innovation is great, of course, but it makes no sense without tradition. These traditions pertain to the people and research schools that we should keep running and developing. Therefore, on our way to the bright new future, we should be mindful of the good past," Sergey Zhvachkin addressed the TPU Academic Council.

Dmitry Sednev is a graduate of Tomsk Polytechnic University. In 2012, he graduated from the university with a degree in nuclear materials safety and nonproliferation. Later, he did postgraduate studies at TPU and defended his PhD thesis. At the university, he combined teaching and research work in the field of nondestructive testing, ultrasonic tomography, materials science, safety and nonproliferation of nuclear materials.

He developed a technology to monitor the integrity and authenticity of containers with nuclear materials and wastes by weld seam, as well as an ultrasonic flaw detector in a new configuration. It is a robotic analogue of U/S for metal parts that allows detecting the smallest defects in materials.

At the age of 28, he became the head of the TPU School of Non-Destructive Testing. This school is one of Russian leaders in the field of non-destructive testing, and it is one of the most successful divisions for interaction with industrial partners and implementation of developments at TPU.

"I am proud of being a part of the TPU team for many years. I know how strong we are when we act together. There are several challenges requiring the efforts of the entire university right now. These are the enrollment campaign, participating in the new ministerial program Priority 2030, and protecting the health of students and employees before the beginning of the academic year under pandemic. At the same time, we cannot miss out the initiative in strategic areas not only for the university, but also for the region and for the whole country. These include activities related to the Hydrogen Technology Consortium, where TPU is the leader, joint work with the Tomsk Region Administration and Tomsk universities in the Big University alliance, projects in the field of hard-to-recover hydrocarbon search and production technologies, nuclear power, and social tasks related to the field of nuclear medicine that we solve together with our colleagues.

Since its foundation, TPU has been serving as a leader of advanced educational models for training engineers who develop new industrial processes. Now this mission is taking on particular significance.

It is absolutely feasible for TPU, which possesses strong traditions established by its predecessors, a vision of the future and unique people – scientists, teachers and specialists," said Dmitry Sednev in his address to the Academic Council.

Dmitry Sednev is a Candidate of Technical Sciences and Associate Professor. He led the School of Non-Destructive Testing, the International Research and Education Laboratory for Non-Destructive Testing and the Industrial Tomography Center at TPU. He graduated from the Skolkovo Rectors’ School. Holder of a medal of the Russian Academy of Sciences for young scientists, a scholarship of the President of the Russian Federation.

Under his guidance, the team participates in international scientific megascience projects. The largest in Russia ultrasonic flaw detector for the international experimental thermonuclear reactor ITER, which is being built in France, is among these projects. Dmitry Sednev led the creation of an experimental site for advanced non-destructive testing at Tomsk Electromechanical Plant (TEMZ), opened in the spring of 2021.