Scientists of Tomsk Polytechnic University jointly with scientists from National Chiao Tung University (Taiwan) proposed a simple method to control and move a photonic nanojet (PNJ) by a ray focusing in a very small local area. The operation of powerful up-to-date microscopes is based on the PNJ effect. In the long run, the simple method of moving the PNJ in depth may help to accelerate and simplify work with microscopes, increase the depth of field without reducing the quality of scanning. The research findings are published in the Optics Letter academic journal (IF: 3,776; Q1). 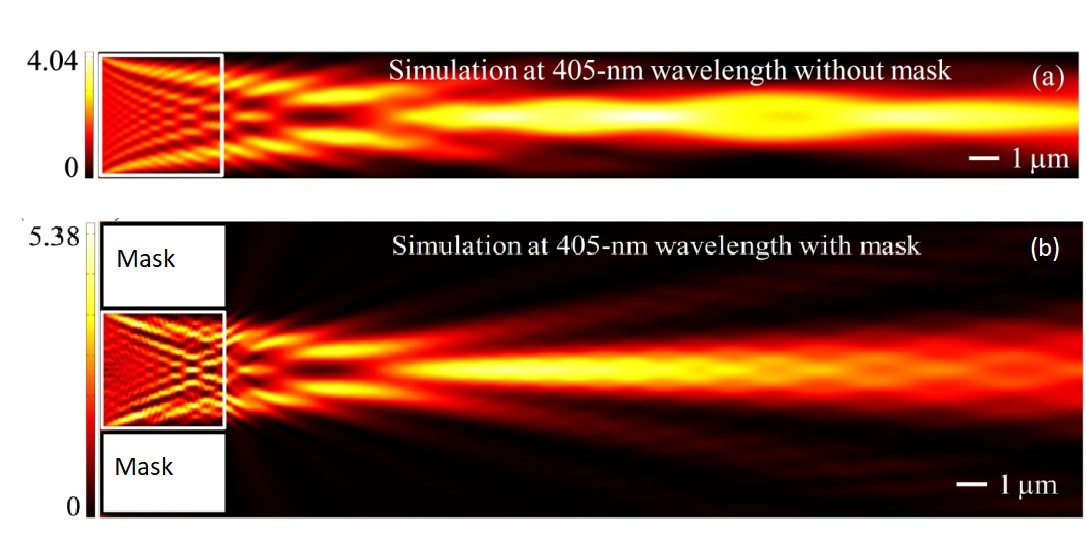 Photo: generating a PNJ without and with a screen

“There are small glass spheres in the design of powerful up-to-date microscopes — nanoscopes with the resolution up to 200 nanometers. The sphere focuses on emission, however, at the same time, it remains in the focus point of the lens. Due to this, multiple zooming occurs. To see a new area of the object in its depth, nowadays, the stand is moved with the object. It reduces the research quality and takes a lot of time. We offered to move the PNJ using two metal screens — thin aluminium plates,” Oleg Minin, Professor of the Division for Electronic Engineering of the TPU School of Non-Destructive Testing, a supervisor of the project, says.

The experiments were conducted using a dielectric polymer cube and not the sphere. The size of the cube is only four micrometres. The authors of the article note that the obtained results are also applied to the sphere.

“The plates were located on the sides of the cube. The PNJ moved together with the movement of these metal screens. Moreover, we fixed that the length and width of generated PNJs decreased almost in two folds in case of screen presence, which in the long run will allow changing both its resolution and the focus position in the process of microscope operation. At the same time, the resolution of the PNJ increased by 1,2 folds. Furthermore, by changing the width of plates, it is possible to change the PNJ focal length, i.e. to scan the focus area in depth, to view objects in the third dimension,” the scientist explains.

During the experiments conducted, the plates were moved manually. According to the scientists, in the future, this process can be automated.

“It is an extremely simple solution. Due to the lower cost of these dielectric cubes, they can be used for obtaining the PNJ effect not only in microscopes but also in modern integrated optical circuits, optical switches, lithography systems and so on,”