Scientists of Tomsk Polytechnic University jointly with their colleagues from the universities of Great Britain and Taiwan have proposed a new method how to obtain a photonic hook, a new type of an artificially curved light beam. They were able to generate the photonic hook using two small bars from a dielectric material. The proposed method turned out to be simpler than the previous one. The new method was described in the article released in Scientific Reports published by the Nature Portfolio publishing house (IF: 5,133; Q1). 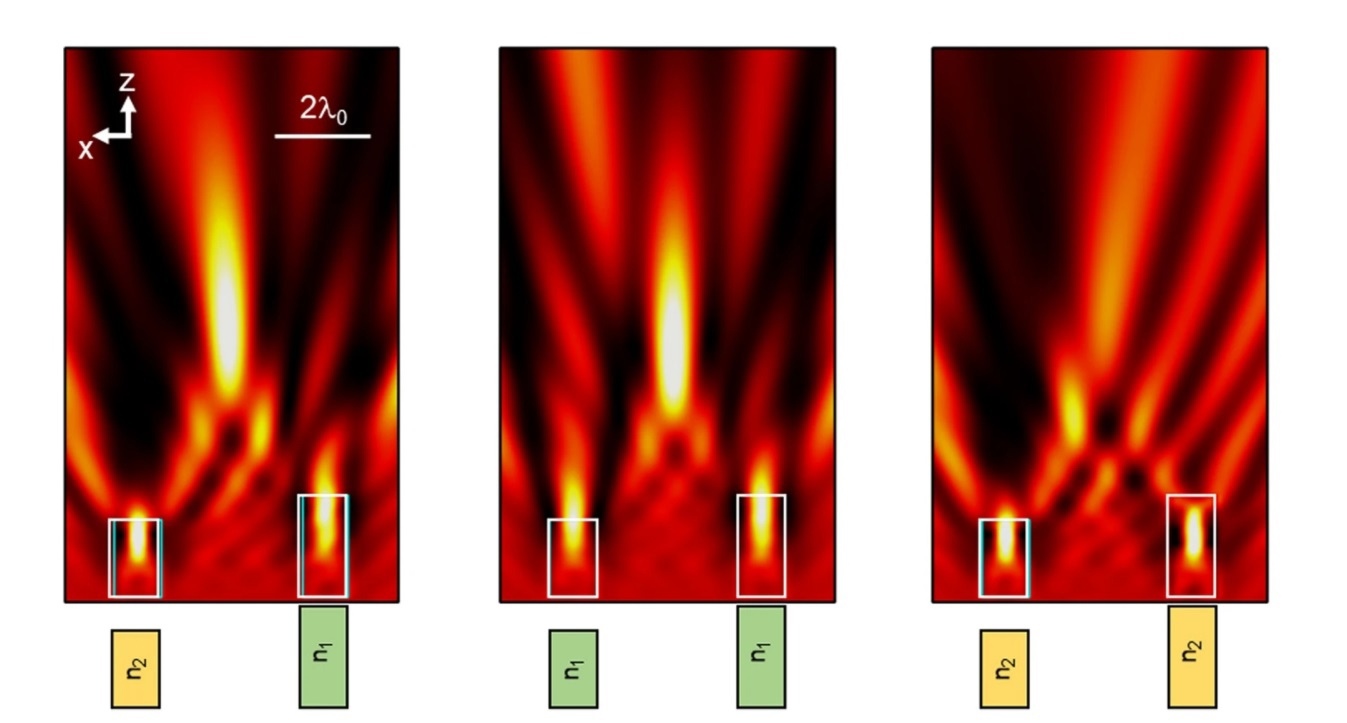 Figure: generation of a photonic hook at different distances between the bars

The photonic hook is a type of the artificially curved light beam. Previously, Airy beams, the only one type of curved light beams, were known to science. The research group from TPU jointly with their colleagues from Bangor University (Great Britain) and a number of Russian universities theoretically substantiated and then experimentally confirmed the existence of the photonic hook. Such a hook can be used, for instance, in microscopy for super-resolution imaging and for manipulating nanoparticles.

“Our first and by the last moment, the only one method of generating the photonic hook, although was incomparably simpler than methods of obtaining Airy beams, however, required the application of a special-shaped particle or a special-shaped irradiating beam. For instance, there was required a cube-shaped microparticle with a prism attached to it. Percolating this particle, photon beam radiation twisted and took a shape of a hook.

The new method allowed obtaining a hook using two parallel rectangular microbars. The bars can be easily made of a wide range of dielectric materials, such as glass or polytetrafluoroethylene. Furthermore, everything can be done on the plane, what is convenient,”

The new method allowed obtaining a hook using two parallel rectangular microbars. The bars can be easily made of a wide range of dielectric materials, such as glass or polytetrafluoroethylene. Furthermore, everything can be done on the plane, what is convenient,” Igor Minin, Professor of the Division for Electronic Engineering of the TPU School of Non-Destructive Testing, a project supervisor, says.

The photonic hook is generated by the new method in the following way: an electromagnetic wave fractionizes into two parts, the first part percolates the bars, while the second part percolates between them. At the output, the waves merge and finally, the hook becomes twisted.

“In this article, we described the physics of obtaining the hook by the new method. It provided one more tool for generation of the curved photonic beam required in research works,” the scientist explains.

By changing the distance between two bars and their refractive indexes, it is possible to control the hook shape and its curvature.

“Further, we intend to research the situations where the distance between the bars is filled not only by air. It is possible to obtain the hook in gas or liquid mediums. It also can affect the characteristics of the obtained hook,” Igor Minin says.

Among the article authors, there were the scientists from Tomsk Polytechnic University, Newcastle University (Great Britain) and National Chiao Tung University (Taiwan). The research work was supported by a grant of the Russian Foundation for Basic Research and the TPU Competitiveness Enhancement Program.