Cited Scientists have summarized the publication activity of TPU scientists in February 2017. Last month the university publication register added 31 articles with TPU affiliation in journals with high impact factor, 25 out of which were published in the Q1 and Q2 journals. 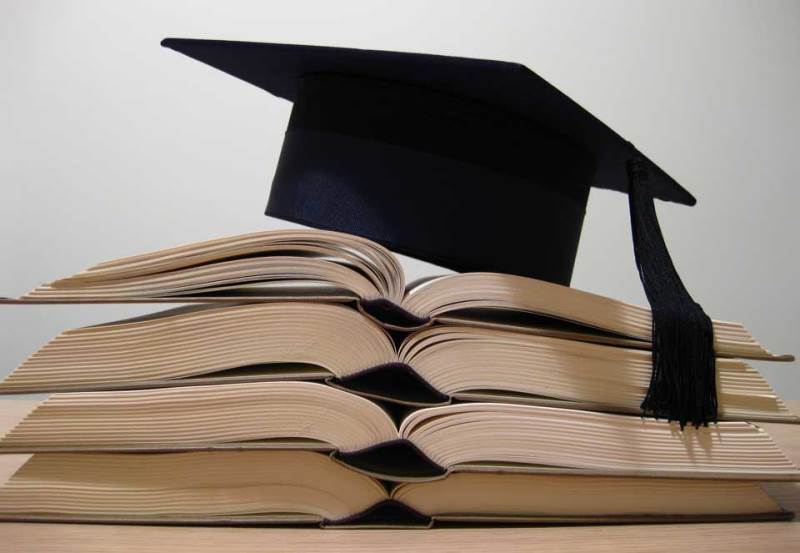 The most cited co-author of TPU scientists has H-index=53. The most rated journal published the polytechnicers has IF=11.329 (in SAU Uncoventional Natural Resources).

Recent hypotheses, based on atmospheric records and models, suggest that permafrost carbon (PF-C) accumulated during the last glaciation may have been an important source for the atmospheric CO2 rise during post-glacial warming. However, direct physical indications for such PF-C release have so far been absent. Here we use the Laptev Sea (Arctic Ocean) as an archive to investigate PF-C destabilization during the last glacial–interglacial period. Our results show evidence for massive supply of PF-C from Siberian soils as a result of severe active layer deepening in response to the warming. Thawing of PF-C must also have brought about an enhanced organic matter respiration and, thus, these findings suggest that PF-C may indeed have been an important source of CO2 across the extensive permafrost domain. The results challenge current paradigms on the post-glacial CO2 rise and, at the same time, serve as a harbinger for possible consequences of the present-day warming of PF-C soils. 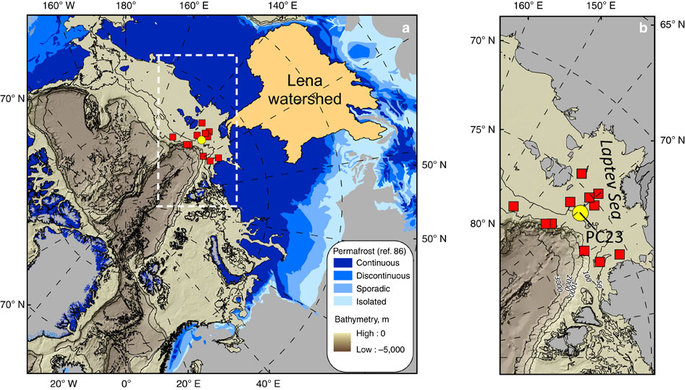 Pic: (a) Blue shades show the extent of permafrost as continuous, discontinuous, sporadic and isolated86. The Lena River watershed is shown as an orange area. The location of PC23 collected during the SWERUS-C3 expedition (2014) in the mid-outer shelf of the Laptev Sea is shown as a yellow filled circle. Filled red squares display the location of other transgressive deposits from published studies that were used for carbon deposition and flux calculations18,20,82. (b) Close-up of the sediment records in the Laptev Sea. The region of b corresponds to the open rectangle shown in a.

Mobilisation of terrestrial organic carbon (terrOC) from permafrost environments in eastern Siberia has the potential to deliver significant amounts of carbon to the Arctic Ocean, via both fluvial and coastal erosion. Eroded terrOC can be degraded during offshore transport or deposited across the wide East Siberian Arctic Shelf (ESAS). Most studies of terrOC on the ESAS have concentrated on solvent-extractable organic matter, but this represents only a small proportion of the total terrOC load. In this study we have used pyrolysis–gas chromatography–mass spectrometry (py-GCMS) to study all major groups of macromolecular components of the terrOC; this is the first time that this technique has been applied to the ESAS. This has shown that there is a strong offshore trend from terrestrial phenols, aromatics and cyclopentenones to marine pyridines. There is good agreement between proportion phenols measured using py-GCMS and independent quantification of lignin phenol concentrations (r2 = 0.67, p < 0.01, n = 24). Furfurals, thought to represent carbohydrates, show no offshore trend and are likely found in both marine and terrestrial organic matter. We have also collected new radiocarbon data for bulk OC (14COC) which, when coupled with previous measurements, allows us to produce the most comprehensive 14COC map of the ESAS to date. Combining the 14COC and py-GCMS data suggests that the aromatics group of compounds is likely sourced from old, aged terrOC, in contrast to the phenols group, which is likely sourced from modern woody material. We propose that an index of the relative proportions of phenols and pyridines can be used as a novel terrestrial vs. marine proxy measurement for macromolecular organic matter. Principal component analysis found that various terrestrial vs. marine proxies show different patterns across the ESAS, and it shows that multiple river–ocean transects of surface sediments transition from river-dominated to coastal-erosion-dominated to marine-dominated signatures.

A straightforward synthesis of diaryliodonium salts is achieved by using Oxone as the stoichiometric oxidant. Slow addition is the key to obtaining good yields and purities of the reaction products, which are highly useful reagents in many different areas of organic synthesis.

Conductive polymer (poly(3,4-ethylenedioxythiophene)-poly(styrenesulfonate) (PEDOT:PSS) is an attractive platform for the design of flexible electronic, optoelectronic, and (bio)sensor devices. Practical application of PEDOT:PSS often requires an incorporation of specific molecules or moieties for tailoring of its physical–chemical properties. In this article, a method for covalent modification of PEDOT:PSS using arenediazonium tosylates was proposed. The procedure includes two steps: chemisorption of diazo-cations on the PEDOT:PSS surface followed by thermal decomposition of the diazonium salt and the covalent bond formation. Structural and surface properties of the samples were evaluated by XPS, SEM-EDX, AFM, goniometry, and a range of electric and optical measurements. The developed modification procedure enables tuning of the PEDOT:PSS surface properties such as conductivity and optical absorption. The possibility to introduce various organic functional groups (from hydrophilic to hydrophobic) and to create new groups for further functionalization makes the developed procedure multipurpose.

We consider, in the harmonic superspace approach, the six-dimensional N = (1, 0) supersymmetric Yang-Mills gauge multiplet minimally coupled to a hypermultiplet in an arbitrary representation of the gauge group. Using the superfield proper-time and background-field techniques, we compute the divergent part of the one-loop effective action depending on both the gauge multiplet and the hypermultiplet. We demonstrate that in the particular case of N = (1, 1) SYM theory, which corresponds to the hypermultiplet in the adjoint representation, all one-loop divergencies vanish, so that N = (1, 1) SYM theory is one-loop finite off shell.

Alexei Panin, a professor at the Department of General Physics, et al.

Article: The effect of ultrasonic impact treatment on the deformation behavior of commercially pure titanium under uniaxial tension

The deformation behavior of commercially pure titanium specimens subjected to surface hardening by ultrasonic impact treatment followed by uniaxial tension was investigated experimentally and numerically. The microstructure of the ultrasonically treated ~ 100 μm thick surface layer undergoing uniaxial tension was revealed, using transmission electron microscopy and electron backscatter diffraction. Non-equiaxed 100–200 nm α-Ti grains composed of 2 nm diameter TiC and Ti2C nanoparticles, ω- and α″-phase crystallites were found in the 10 μm thick uppermost layer. Fine and coarse α-Ti grains containing dislocations and twins were observed at depths of 20 and 50 μm below the specimen surface, respectively. A non-crystallographic deformation (shear banding) mechanism at work in the nanostructured surface layer of the specimens under study was revealed. The evolution of shear bands was studied by the finite difference method, with the fine-grained structure being explicitly accounted for in the calculations. Shear band self-organization was described, using the energy balance approach similar to that based on Griffith's energy balance criterion for brittle fracture. The tensile deformation of the hardened layer lying at a depth of 50 μm was implemented by the glide of dislocations and growth of deformation twins induced by preliminary ultrasonic impact treatment.

Article: A new approach for the immobilization of poly(acrylic) acid as a chemically reactive cross-linker on the surface of poly(lactic) acid-based biomaterials

A new approach for the immobilization of poly(acrylic) acid (PAA) as a chemically reactive cross-linker on the surface of poly(lactic) acid-based (PLA) biomaterials is described. The proposed technique includes non-covalent attachment of a PAA layer to the surface of PLA-based biomaterial via biomaterial surface treatment with solvent/non-solvent mixture followed by the entrapment of PAA from its solution. Surface morphology and wettability of the obtained PLA-PAA composite materials were investigated by AFM and the sitting drop method respectively. The amount of the carboxyl groups on the composites surface was determined by using the fluorescent compounds (2-(5-aminobenzo[d]oxazol-2-yl)phenol (ABO) and its acyl derivative N-(2-(2-hydroxyphenyl)benzo[d]oxazol-5-yl)acetamide (AcABO)). It was shown that it is possible to obtain PLA-PAA composites with various surface relief and tunable wettability (57°, 62° and 66°). The capacity of the created PAA layer could be varied from 1.5 nmol/cm2 to 0.1 μmol/cm2 depending on the modification conditions. Additionally, using bovine serum albumin (BSA) it was demonstrated that such composites could be modified with proteins with high binding density (around 0.18 nmol/cm2). Obtained fluoro-labeled PLA-PAA materials, as well as PLA-PAA composites themselves, are valuable since they can be used for biodegradable polymer implants tracking in living systems and as drug delivery systems. 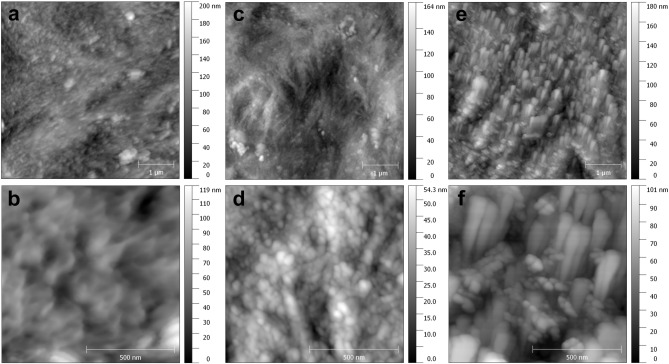 Journal: Journal of Quantitative Spectroscopy and Radiative Transfer (IF 2,859; Q1).

Article: High resolution study of the rotational structure of doubly excited vibrational states of 32S16O18O: The first analysis of the 2ν1, ν1+ν3ν1+ν3, and 2ν3 bands

The high resolution infrared spectra of the 32S16O18O molecule were recorded with a Bruker IFS 120 HR Fourier transform interferometer for the first time in the region of 1800–2800 cm−1 where the bands 2ν1, ν1+ν3ν1+ν3, and 2ν3 are located. About 3970, 2960 and 3450 transitions were assigned in the experimental spectra with the maximum values of quantum numbers Jmax./Kamax. equal to 59/20, 68/25, and 43/18 to the bands 2ν1, ν1+ν3ν1+ν3, and 2ν3, respectively. The subsequent weighted fit of experimentally assigned transitions was made with the Hamiltonian model which takes into account the resonance interactions between the studied vibrational states. As the result, a set of 39 fitted parameters was obtained which reproduces the initial 3213 ro-vibrational energy values obtained from the assigned transitions with the drms=2.4×10−4cm−1.

JC Legros, a professor at the Department for Automatization of Thermal Energy Processes, Shevtsova V. (h-index: 21).

Article: Ignition of the Coal–Water Slurry Containing Petrochemicals and Charcoal

The lack of effective technologies to use coal processing waste and waste flammable liquids is a major research and development problem. To address this problem, we study the ignition characteristics and conditions for coal–water slurries (CWS) based on these wastes. The key challenge posed by the wastes under study is their poor reactivity (they require more power resources for sustainable ignition). Therefore, this paper suggests adding a highly reactive material (charcoal) in a low concentration to coal–water-slurry containing petrochemicals (CWSP) based on wastes. Individual CWSP droplets are studied in a model combustion chamber. The integral characteristics of the processes under study (ignition delay time and minimum oxidizer temperatures sufficient for ignition) are determined for a CWSP droplet of 0.5–2 mm in radius fixed at the junction of a low-inertia thermocouple using a high-speed (up to 105 fps) video camera and Tema Automotive software. We compare the ignition characteristics of CWSP compositions based on charcoal and brown coal as well as filter cakes (processing waste) of coking, low-caking, and non-baking coals in an oxidizer flow (temperature of 600–1000 K and velocity of 0.5–5 m/s). Charcoal is a promising additional component for the CWS and CWSP. In view of ecological, economic, and energy-related aspects, it is advisible to use charcoal as an additive to intensify the CWS and CWSP ignition. Even a small addition (within 10–15% in relative mass concentration) of this component may significantly reduce the limit (minimum) temperature of sustainable ignition and ignition delay time (inertia).

Dushantha Nalin K. Jayakody, a professor at the Department of Software Engineering.

In this paper, a strip-shaped multi-hop ad hoc network is analyzed using a spatial Poisson point process (PPP) and stochastic geometry. The decode-and-forwardprotocol is considered for transmission over the multi-hop network where cooperative communications is employed at each hop. An analytical expression for the probability density function of the received power at an arbitrary node is derived, given a set of nodes transmits in the previous hop, which is further used to characterize the coverage performance of the network. The received power at a node becomes a doubly stochastic process owing to random path loss and a Rayleigh fading channel. The notions of one-hop success probability and coverage range are analyzed for various network parameters. An algorithm for conserving energy is also proposed by considering PPP thinning and its performance in terms of the fraction of energy saved is quantified. It is shown that the proposed algorithm is more energy efficient as compared with an independent thinning algorithm.