TPU scientist Raul Rodrigez and his colleagues from Lithuania and Germany were the first in the world to suggest how with the help of graphene oxide, in fact ordinary graphene as in pencils, but oxidized to make the surface of any material suitable for immobilization of living cells. Devices with such coatings will make it possible to detect and study individual living cells, including dangerous microorganisms, cancer cells and dangerous substances in the human body. In future, this technology will allow creating flexible diagnostic devices implanted under the skin. The study outcomes were published in Sensors and Actuators B: Chemical (IF 5.4; Q 1). 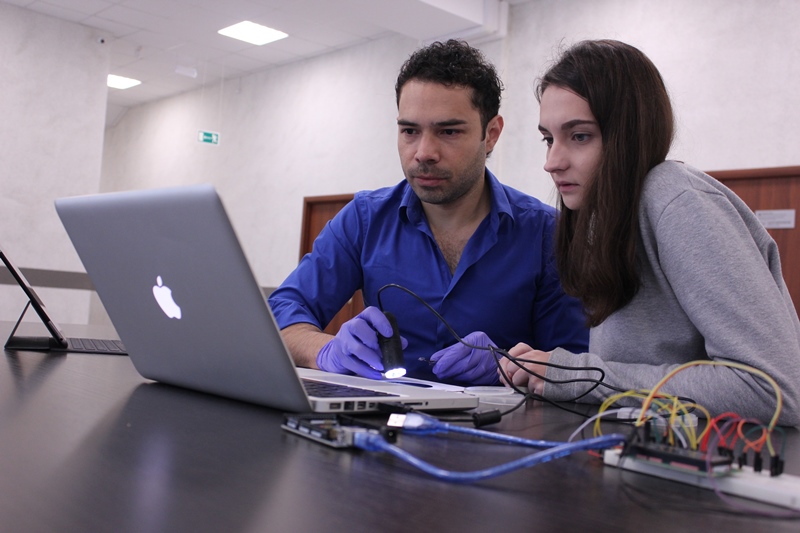 ‘Medical scientists are still trying to find an answer to the question related to metastatic spread. Studying communication of cells in the process of their formation is a possible answer to this question. For this purpose it is necessary to be able to distinguish the behavior of bulk cell samples from the behavior of single cells,’

- tells Professor Raul Rodrigez from the Department of Lasers and Lighting Engineering.

The technology developed by Tomsk scientists and their colleagues allows monitoring cell colonies and separate the cells of interest from all the others. Moreover, it will be more affordable than existing counterparts.

He adds that the study of communication and interaction of cells is currently important for many areas in medicine. The same technology can help in the development of biosensors.

‘When creating biosensors there is the same problem as when creating implants which are implanted into the human body. In implants the interaction of cells with their surface is determined by wettability. Wettable surfaces enhance the attachment of living cells to bioimplants, as well as their proliferation and so on. The surface of biosensors should also be well wetted so that we can ensure the attachment of cells or bacteria to the sensors,’ says Professor Rodrigez.

The scientist explains that water can help understand what a wettable or hydrophilic surface means. When water droplets fall on the surface of a material and spread over it, it means that the interaction between the droplets and the surface is high and the material is hydrophilic. If water droplets gather in balls, the interaction between water molecules with each other is more than with the surface, it means the material is hydrophobic.

‘The simple technology using graphene oxide allows us to make any material hydrophilic and therefore suitable for creating inexpensive biosensors,’

Photo: Drying process of yeast cell suspension, which was prepared by dispersion of yeast cells in water and then drop coated on clean substrates such as: glass, silicon, HOPG, PDMS, and mica. Pictures were taken before and after water evaporation proceeded at ambient conditions over 5–10 min.

In their work the scientists demonstrated this effect by the example of ordinary yeast cells deposited on several arbitrary substrates of glass, silicon and other materials coated with graphene oxide. The study results showed that cells are well attached to modified substrates. Such improved surfaces led to the appearance of areas where single cells could be observed. Figuratively speaking, cells fell into ‘traps’ and could not come together, as it usually does on surface. Using this property, it would be possible to study how cells behave in the isolated state and compare their behavior in the colony.

For manufacturing biosensors it is supposed to create electrical contacts on the same coating.