During expeditions to the Siberian Arctic seas scientists of Tomsk Polytechnic University proven that mainland permafrost groundwater penetrates to the Arctic shelf. Such a zone of penetration was discovered in the Buor-Khaya Gulf, Laptev Sea. Simulation showed that the volume of groundwater flow in this place is equal to the winter runoff of the large river Yana. For many years, Russian and foreign scientists could only assume the probability of submarine groundwater discharge to the Arctic shelf, since it was considered that coastal shelf features the presence of submarine permafrost which blocks the upward movement of deep gas-liquid fluid. The scientists discovered the situation to be different. 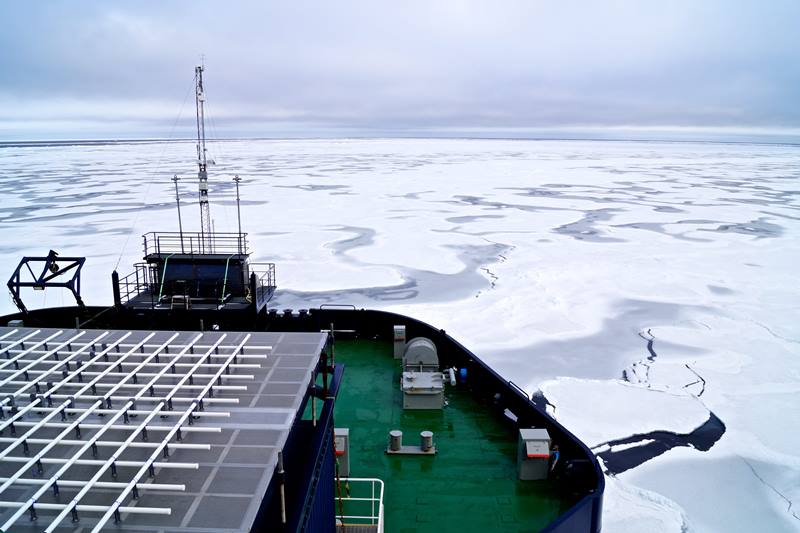 Photo: credit: one of the members of SWERUS expedition

‘Prior to our discovery, there was no direct evidence that sub-permafrost groundwater is involved in the water discharge from the mainland to the Arctic Ocean along with river runoff. There was even a consideration that it is impossible due to a natural obstacle, in particular continuous submarine permafrost.

For the first time, we have proven the phenomenon of discharge (output of groundwater – ed.) of groundwater to the Arctic shelf. We began to notice first anomalies during the Siberian Arctic Seas studies in 2002 in some parts we found colder water in the intermediate levels of marine water, but then shortage of scientific equipment did not allow us to identify the reason of this phenomenon,’ tells the research fellow Alexander Charkin, PhD in geology and mineral sciences, from the Arctic Seas’ Carbon International Research Laboratory (ASCIRL).

As part of ASCIRL expeditionary research on the projects (supervisor Professor Igor Semiletov) of the RF Government and the Russian Science Foundation (supervisor Natalia Shakhova) in 2014-2015 scientists found increased values of short-lived radioisotopes of radon and radium in anomaly cold waters in the Buor-Khaya Gulf. Usually increased values of these isotopes are observed in the bottom water since their natural source is bottom sediments.

‘A true hunt for abnormal water began. At first, we focused only on the water of temperature and found that in one site the temperature of water from the surface to the bottom was much colder than surrounding water. In that site we took water samples for short-lived and long-lived radionuclides. Results showed increased values of natural radionuclides of radium and radon. Then we carried out complex geophysical works aimed at revealing the gap in the continuity of submarine permafrost and found out that there is a through talik, i.e. part of shelf without permafrost, which emerged on the site of tectonic fault,’ explains the researcher.

So far, the scientists have studied only one zone of sub-permafrost groundwater in the Buor-Khaya Gulf. In the short-term, they plan to expand the investigation area to the entire shelf of the East Arctic seas.

‘This work would be unlikely if researchers from the TPU School Earth Sciences & Engineering and POI and fellows of the TPU School of Nuclear Science & Engineering joined the project. Their knowledge on radionuclide migration and corresponding scientific equipment allowed us to prove the phenomenon of discharge of sub-permafrost groundwater. Five more young TPU physicists Maxim Cherepnev, Alexander Ovsenev, Stanislav Chursin, Nikita Zaikin and Andrey Udalov joined the works,’ notes Alexander Charkin.

‘Now we have to find an answer to the question of the extent of groundwater output and its impact on biogeochemical balance of the Arctic seas. So far, simulation showed that the volume of groundwater runoff in this place of the Buor-Khaya Gulf is equal to the winter runoff of the river Yana.

Our strategic goal is to conduct large-scale studies aimed at assessing the role of sub-permafrost groundwater discharge on the marine Arctic ecosystem and on the freshwater balance of the entire Arctic Ocean. This is an extremely promising scientific direction, in which TPU scientists demonstrated global leadership, having combined knowledge and engineering capabilities of a number of RAS institutes and foreign universities,’ says Igor Semiletov.