Tomsk Polytechnic University hosted a qualifying stage for the 15th All-Russian Non-Destructive Testing Professional Contest. Nine specialists from Tomsk and other cities competed in their skills to detect the smallest defects in manufacturing items. The winners of the Tomsk round will participate in the final to be held on 26 February 2018 in Moscow. 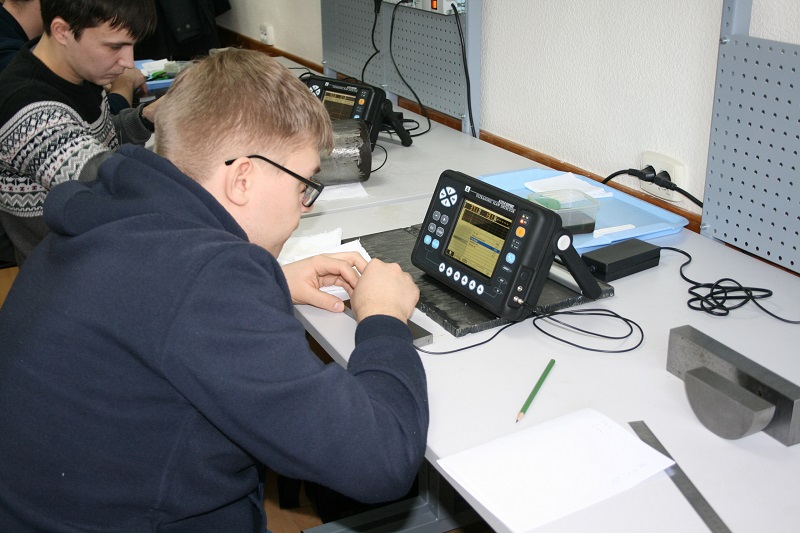 Specialists from Gazprom Transgaz Tomsk, Tekhnologiya, Uralkhimmash, Achinskiy Refinery took part in the contest. The first stage included a test on the theory of non-destructive testing methods: vibrodiagnostic, visual and measuring, eddy current, capillary, magnetic, radiography, thermal, and ultrasonic ones. Contestants had an hour to pass the test.

At the practical round, the participants demonstrated their work with radiation (X-ray) and ultrasonic testing methods. Their skills were assessed by a jury consisting of experts from the TPU Regional Center for Attestation, Monitoring and Diagnostics. They had to find the smallest defects, e.g. discontinuities, in welds of steel parts that can’t be detected visually.

Ultrasonic testing had to be done within 4.5 hours, X-ray testing – within 5 hours. As a result, Alexander Kasyanov from OOO Tekhnologiya took the first place in ultrasonic testing. Engineer Maksim Demidov from Gazprom Transgaz Tomsk ITC became the winner in radiation testing. They both detected all impermissible defects on competitive prototypes.

The director of the Regional Center for Attestation, Monitoring and Diagnostics Denis Belkin says:

‘At present, qualified specialists in non-destructive testing are extremely valuable in the production of critical parts that are under heavy loads. These are the specialists that help at the manufacturing stage to detect those defects which may cause substantial economic losses or emergency situations.

In addition, the winners of the regional round will compete at the final of the contest to earn the highest qualification.’