The Cited Scientists project summarizes publication results of TPU researchers in the University Register of January 2018. Totally, according to the TPU Publication Activity Development Office, 26 articles with high IF were registered on the server and 22 articles were published in the Q1 and Q2 journals. 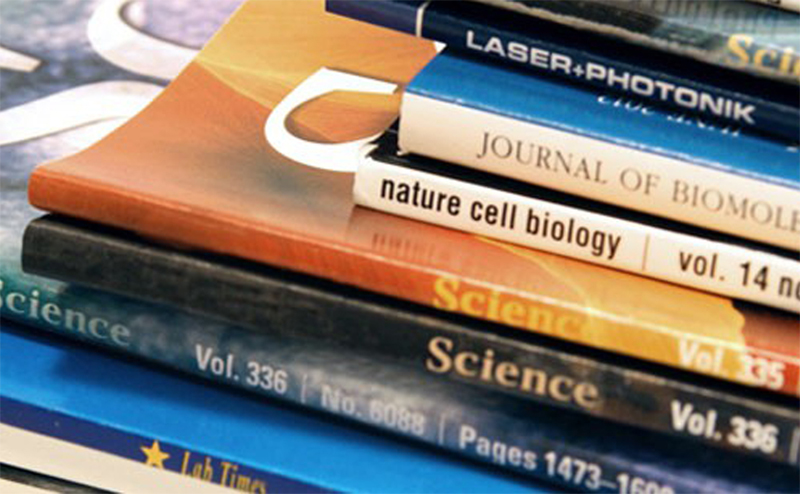 JRF Alexander Timin’s article Efficient gene editing via non-viral delivery of CRISPR–Cas9 system using polymeric and hybrid microcarriers, published in Nanomedicine: Nanotechnology, Biology and Medicine (IF 5.72; Q1) became the most popular in media. According to the Publication Activity Development Office, the paper received the highest altmetric indicators: 21 readers in Mendeley, and 10 tweets. In 2017, the publication was covered both in federal and regional mass media.

In January, there was a webinar for early career researchers, held by Ass. Prof. Dmitri Glushkov, Ph.D., the supervisor of five research projects supported by RF President Grant Council and RFBR. He shared his experience how to win a grant for a research project. The webinar’s recording is available at the link.

CRISPR–Cas9 is a revolutionary genome-editing technology that has enormous potential for the treatment of genetic diseases. However, the lack of efficient and safe, non-viral delivery systems has hindered its clinical application. Here, we report on the application of polymeric and hybrid microcarriers, made of degradable polymers such as polypeptides and polysaccharides and modified by silica shell, for delivery of all CRISPR–Cas9 components. We found that these microcarriers mediate more efficient transfection than a commercially available liposome-based transfection reagent (>70% vs. <50% for mRNA, >40% vs. 20% for plasmid DNA). For proof-of-concept, we delivered CRISPR–Cas9 components using our capsules to dTomato-expressing HEK293T cells—a model, in which loss of red fluorescence indicates successful gene editing. Notably, transfection of indicator cells translated in high-level dTomato knockout in approx. 70% of transfected cells. In conclusion, we have provided proof-of-principle that our micro-sized containers represent promising non-viral platforms for efficient and safe gene editing.

Article: Energy efficiency and environmental aspects of the combustion of coal-water slurries with and without petrochemicals

The paper presents the results of the experimental research into maximum concentrations of anthropogenic emissions from typical brown low-rank coal combustion in the traditional pulverized state as well as from the combustion of coal-water slurries with or without petrochemicals. The temperature of fuel heating in the model combustion chamber varied in the range from 500 °C to 1000 °C. The relative values of concentrations of anthropogenic emissions are calculated with due consideration of key energy characteristics of the fuel: combustion heat, specific mass of the fuel component in a mixture, specific energy obtained per fuel cost.

The research findings show that the temperature monitoring in the combustion chamber is obligatory to provide high ecological indicators. At temperatures below 1000 °C, it is possible to provide stable combustion of fuels and significantly reduce emissions as compared to the traditional high-temperature regimes (above 1000 °C). Thus, temperatures lower than 1000 °C are more rational. Finally, the conditions for the optimal coal fuel combustion are presented in terms of the environmental friendliness, energy and cost efficiency, as well as fire and explosion safety.

Over the recent years, the research community has taken an increasing interest in high-temperature gas-steam-droplet systems. This promotes emerging technologies in thermal or flame water cleaning from unspecified impurities, and firefighting by water slurry aerosols. Unfortunately, these technologies have yet to become mainstream, although they have been regarded as extremely important and promising for several years already. The fact is that there are too few experimental data on the physical processes intensifying the evaporation of water slurries in hot gaseous media. The results of such experiments with temperatures over 1000 °C are virtually impossible to find. These data are so evasive due to fast-paced processes and difficulties in measuring the temperature in evaporating heterogeneous water droplets. The typical durations of high-temperature heating and evaporation do not usually exceed several seconds. In this work, we conduct experiments using a heterogeneous water droplet with a single nontransparent solid inclusion to determine the unsteady temperature field of the latter. We use an optical diagnostic technique, Planar Laser Induced Fluorescence, to study the conditions, mechanism, reasons and characteristics of water boiling leading to an explosive breakup (disintegration) of water slurry droplets. Rhodamine B acts as a fluorophore. The typical temperatures are determined in the depth of a droplet, near its free (outer) surface, and at the interface. The water temperature at the water – solid inclusion interface is shown to be higher than at the outer surface of a droplet. Furthermore, we compare the temperature fields of a homogeneous and heterogeneous water droplet under identical heating conditions.

Carbide cutting tools with CVD diamond coatings are one of the most promising combinations for machining applications because of their exceptional durability in the processing of hard-to-treat materials. In the current work, we investigated a new technique to increase diamond coating adhesion to WC-Co substrates, based on the principle of removing loosely bound nanodiamond growth centers (the cause of regions with low adhesion for the growing coating) from the substrate surface using ion etching. As a result, well-adherent coatings were obtained with a columnar microstructure and thickness up to 40 μm. We also investigated the evolution of density variation of the growth centers for various ion fluxes and exposure time. The difference in mechanisms of diamond coating delamination from substrates without ion etching pretreatment and after pretreatment was also examined. Comparative measurements of coating adhesion by the Rockwell adhesion testing methods and determinations of the self-detachment thickness were made. The relative simplicity, low energy consumption and high efficiency of this method make it attractive for both industrial and scientific applications.

The paper presents the results of the experimental investigation of the physical and chemical properties of the TixSiyCzOw composite nanopowders, which were first obtained using a pulsed plasma chemical method. The pulsed plasma chemical synthesis was achieved using a technological electron accelerator (TEA-500). The parameters of the electron beam are as follows: 400–450 keV electron energy, 60 ns half-amplitude pulse duration, up to 200 J pulse energy, and 5 cm beam diameter. The main physical and chemical properties of the obtained composites were studied (morphology, chemical, elemental and phase composition). The morphology of the TixSiyCzOw composites is multiform. There are large round particles, with an average size of above 150 nm. Besides, there are small particles (an average size is in the range of 15–40 nm). The morphology of small particles is in the form of crystallites. In the TixSiyCzOw synthesised composite, the peak with a maximum of 946 cm–1 was registered. The presence of IR radiation in this region of the spectrum is typical for the deformation of atomic oscillations in the Si?О?Ti bond, which indicates the formation of the solid solution. The composites consist of two crystal phases – anatase and rutile. The prevailing phase of the crystal structure is rutile.

Article: Effect of parylene C coating on the antibiocorrosive and mechanical properties of different magnesium alloys

In this paper, parylene C coating with the thickness of 2 μm was deposited on different magnesium alloy substrates (AZ31, WE43 and AZ91). The structure and phase composition of parylene C coating was analysed by Fourier transformed infrared (FTIR) spectroscopy and X-ray diffraction (XRD). In addition, extensive surface characterization was done using atomic force microscopy.

Alexei Panin, a professor at the Department of Experimental Physics of the School of Nuclear Science & Engineering, et al.

A micromechanical model has been developed to describe deformation-induced surface roughening in polycrystalline materials. The three-dimensional polycrystalline structure is taken into account in an explicit form with regard to the crystallographic orientation of grains to simulate the micro- and mesoscale deformation processes. Constitutive relations for describing the grain response are derived on the basis of crystal plasticity theory that accounts for the anisotropy of elastic-plastic properties governed by the crystal lattice structure. The micromechanical model is used to numerically study surface roughening in microvolumes of polycrystalline aluminum and titanium under uniaxial tensile deformation. Two characteristic roughness scales are distinguished in the both cases. At the microscale, normal displacements relative to the free surface are caused by the formation of dislocation steps in grains emerging on the surface and by the displacement of neighboring grains relative to each other. Microscale roughness is more pronounced in titanium, which is due to the high level of elastic-plastic anisotropy typical of hcp crystals. The mesoscale roughness includes undulations and cluster structures formed with the involvement of groups of grains. The roughness is quantitatively evaluated using a dimensionless parameter, called the degree of roughness, which reflects the degree of surface shape deviation from a plane. An exponential dependence of the roughness degree on the strain degree is obtained.

Article: Changes in the state of heat-resistant steel induced by repeated hot deformation

This work deals with the problems of structural regeneration by thermal restoration treatment (TRT). These include the lack of a structural sign showing that TRT is possible, a consensus on TRT modes, the data on the necessary relaxation depth of residual stresses, or criteria of structural restoration. Performing a TRT without solving these problems may deteriorate the properties of steel or even accelerate its destruction. With this in view, the purpose of this work is to determine experimentally how the residual stress state changes under thermal and mechanical loads in order to specify the signs of the restoration of structure and structural stability. The object of this research is unused 12Cr1MoV steel that has been aged naturally for 13 years. Using X-ray dosimetry with X-ray spectral analysis, we study the distribution of internal residual stresses of the first kind during the repeated hot deformation. After repeated thermal deformation, the sample under study transforms from a viscoelastic Maxwell material into a Kelvin-Voigt material, which facilitates structural stabilization. A sign of this is the relaxation limit increase, prevention of continuous decay of an α-solid solution of iron and restoration of the lattice parameter.

Journal: Journal of Petroleum Science and Engineering (IF 1,873; Q1)

The paper proposes a method of passive leak detection for underwater pipelines by means of phased antenna arrays. It implies element-wise multiplication and addition of the output signals of individual array transducers. The proposed method provides a twofold increase in the resolution of the detection system in comparison with that obtained by conventional signal processing techniques and a high detection rate. The array pattern has been calculated numerically. The paper presents a version of the inspection system that implements the proposed method of signal processing using a phased antenna array, and the experimental results obtained.

Elena Fell, Ass.Prof. at the Division of Social Sciences and Humanities of the School of Core Engineering Education.

Food, Media and Contemporary Culture: The Edible Image comprises a collection of essays written by scholars from the fields of media theory, communication, cultural studies, and sociology, and offers interdisciplinary and international perspectives on the vital and meaningful relationship that we have with “rituals of preparing, presenting and consuming food and images of food.” The book’s thirteen chapters are divided into three parts: “Food, Representation and Identity”; “Food, Consumption and Audience”; and “Food, Sex and Pleasure.” The authors interrogate various aspects of gastronomy, with their discussions gravitating toward the central issue: What role does gastronomic culture play in forming our identities on personal, national, and global levels? While investigating representations of social class and gender, among other themes, via food and modes of consumption, the researchers draw on various sources, including the phenomenon of “food television” in the United Kingdom, “food-themed horror,” and “visual aesthetics of food porn in contemporary food photography.”