Scientists from Tomsk Polytechnic University together with colleagues from the University of Nantes (France) suggest replacing expensive palladium-based catalysts used in organic synthesis for the production of new compounds with more affordable zinc. The tests covered the reactions using zinc acetate in accordance with the concept of green chemistry. Water was used as a solvent and as a result of the reaction no toxic waste was formed. This international project was supported by a joint grant of the Russian Foundation for Basic Research and the National Center for Scientific Research, France (grant No. 18-53-15007). 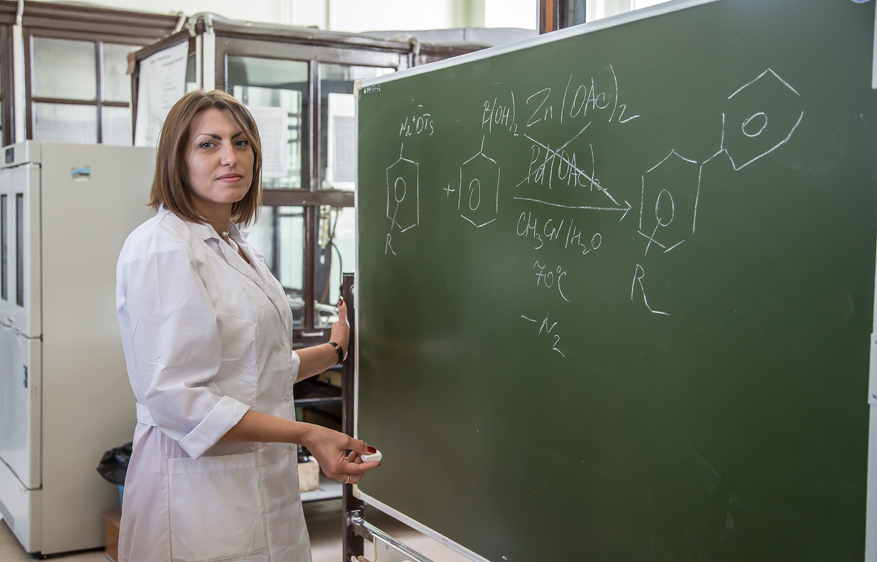 In 2010, a Nobel Prize was awarded for obtaining palladium catalysts in organic synthesis. The prize was awarded to Richard Heck, Ei-ichi Negishi and Akira Sazuki. The most important reactions involving a palladium catalyst were named after the names of the laureates. However, their high price is a significant drawback. In Russia, one gram of palladium acetate costs about 10,000 rubles.

The Deputy Director of the Research School of Chemistry & Applied Biomedical Sciences Marina Trusova, D.Sc. says: ‘Our idea is to replace palladium with a more affordable metal. We have chosen zinc. The cost of one gram of zinc catalyst, i.e. zinc acetate, in Russia is about a hundred rubles.’

The scientists use zinc acetate instead of palladium acetate along with another TPU know-how diazonium salts.

These are organic nitrogen-containing compounds. Usually they are unstable, they can’t be preserved either in aqueous solutions or in a solid state. However, the TPU scientists obtained stable and safe diazonium salts.

‘In the classical Suzuki reaction a new carbon-carbon bond is formed as a result of the interaction of the boric acid and aromatic halidaes. Palladium acetate acts as a catalyst, the entire reaction runs in the alcoholic environment or another organic solvent. Toxic halogenated compounds are obtained as by-products. Using arendiazonium tosylates we were able to carry out the reaction in water, i.e. an environmentally friendly solvent.  Under such conditions, zinc acetate demonstrated high catalytic activity. At the same time, we did not obtain toxic by-products and easily removed zinc acetate from the obtained product. In general, zinc acetate is easily utilized by dissolution in water,’ says Marina Trusova.

Russian scientists conduct research under standard conditions: the reactions are run in flasks. French chemists supervised by Prof. Felpin Francois-Xavier from the University of Nantes shall adapt the method to flow synthesis (flow chemistry).

‘Professor Felpin is a prominent specialist in the trend direction in chemistry, i.e. flow synthesis when the reaction mass is not placed in a flask but passes under a lot of pressure through the reactor. Outwardly, it looks like a thin tube. When mixing two streams and two solutions, the reaction is rather efficient,’ notes the scientist.

According to the researchers, the developed methodologies will extend the application of diazonium salts, as well as facilitate the development of more environmentally friendly technologies in organic synthesis, including in the pharmaceutical industry.