A new method for applying proteins on lactic acid implants may significantly speed up the regeneration of damaged tissues of human blood vessels or cartilage. The authors of the study, who are TPU scientists from Kizhner Research Center and Weinberg Research Center published their findings in the journal Colloids and Surfaces B: Biointerfaces (Q1, IF=3.997). 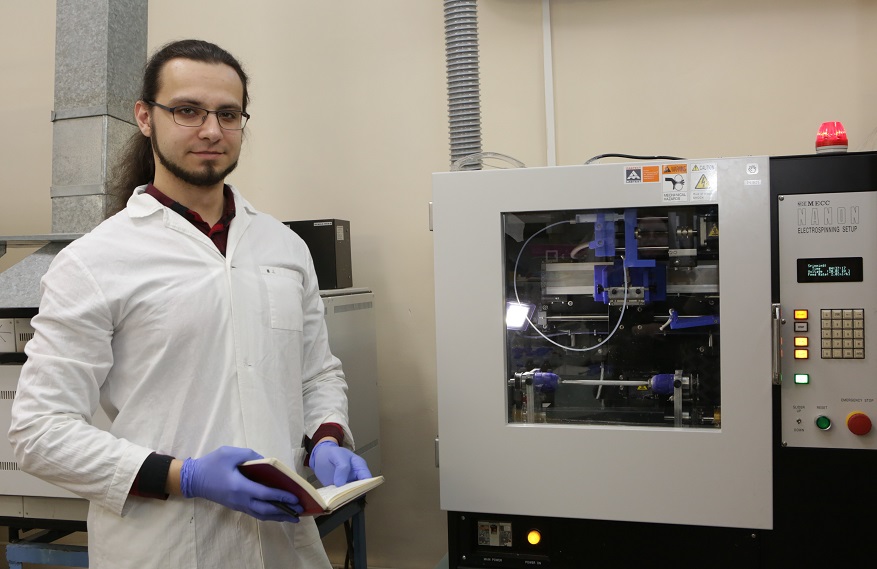 Photo: Semen Goreninsky near a collector for scaffold creation

The development refers to regenerative medicine that deals with the restoration of lost organs and tissues.

The article covers a simple efficient method for applying gelatin on the surface of polylactic acid fibers that are pre-treated with the mixture of organic solvents toluene and ethanol. Scaffolds that are the structures of fibers are a framework for the growth of healthy cells, they are implanted instead of damaged tissues.

They are made through electrospinning that implies pulling thin polymer fibers (from hundreds of nanometers to several microns in diameter) from a solution, when exposed to an electric field. They are wound around a collector (special cylinder), treated by solvents and then dipped into gelatin for better biocompatibility.

‘Applying protein molecules, in particular, gelatin, allows you to speed up tissue repair because cells better attach to the material, spread and grow into it. At the same time, gelatin strengthens scaffolds up to 50% and contributes to a twofold increase in the number of attached stem cells and their average area.’ 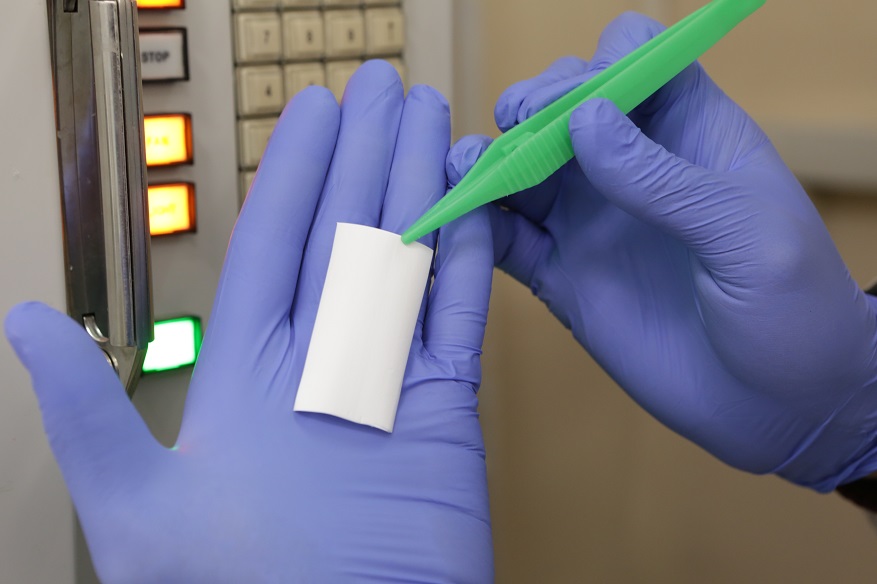 Photo: A sample of the scaffold obtained

The scientist notes that unlike the existing methods the proposed technology does not require special equipment and is resource-efficient.

‘Our method is based on the treatment of scaffolds with the mixture of organic solvents that are available in every chemical laboratory. Other methods require expensive plasma installations and reagents. The used mixture of toluene and ethanol forms a hydrated polymer layer resembling jelly or gelatin by consistency. It is able to capture different molecules in the external medium. Therefore, when a future implant is placed in the mixture with gelatin, the maximum amount of protein is fixed on its fibers in just five minutes. With earlier methods it takes many hours to enable such a result,’

‘The next stage of our research will be testing on animals, namely, inserting implants in the rat aorta. Now we are seeking for funding opportunities,’ says Semen Goreninsky.

The main part of the study was carried out at the Laboratory for Plasma Hybrid Systems under the supervision of Assoc. Prof. Sergey Tverdokhlebov and Prof. Viktor Filimonov. The project was supported by the TPU Competitiveness Enhancement Program. Biological studies on human cells were carried out through financial support of the Russian Foundation for Basic Research at the Almazov Institute of Molecular Biology and Genetics of the Ministry of Health of Russia.

Glauconite can become an eco-friendly alternative to potassium fertilizers
A reactor for continuous synthesis could reduce the cost of biodegradable plastics production
Tomsk to host one of the largest international conferences on surface modification of materials by ion beams
Materials for personalized medicine at polytrauma
‘A human mission to Mars is impossible without ion-beam technology’: German scientist at SMMIB conference