Researchers of Tomsk Polytechnic University collaboratively with colleagues from the Czech Republic developed supersensitive sensors for detecting enantiomers, known as ‘mirror molecules’, in drugs. These molecules can reduce drug effectiveness or even be harmful to humans. Experiments revealed that the developed sensors possessed the best sensitive properties, compared to traditional methods. They use organometallic frameworks as traps for enantiomers. The studies are published in Applied Materials Today (IF: 8.013; Q1). 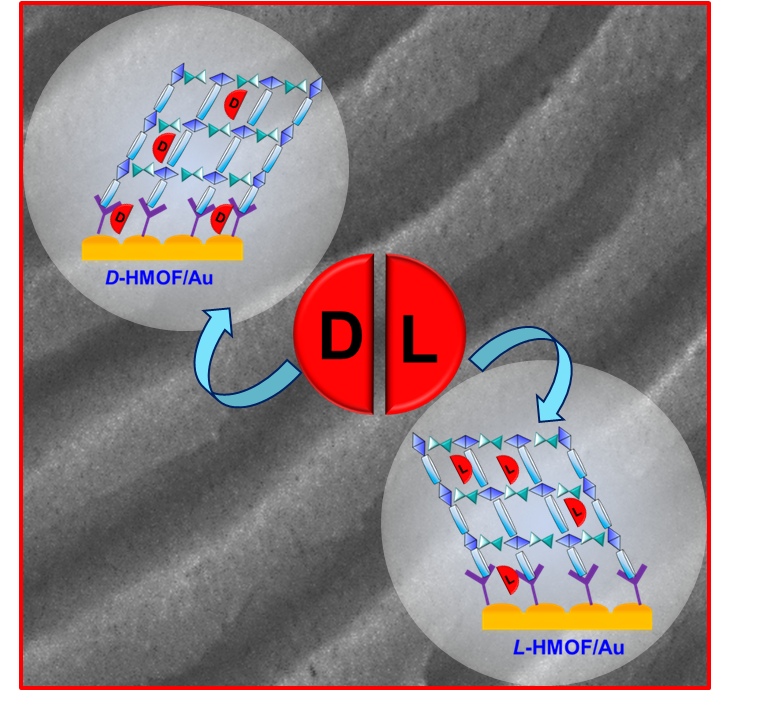 Enantiomers are molecules with a similar formula and physical properties, but they have different rotation directions of polarized light. Therefore, they are like mirror images of each other. Due to this characteristics, enantiomers can result in different biological effects.

“These are chiral molecules, most of which are part of medicinal substances. Their presence is strictly regulated. The medicine should either not contain enantiomers at all or their concentration should not be harmful for health. So, there should be methods to quickly and efficiently detect enantiomers.

The currently used detection methods include electrochemical techniques and chromatography. Their detection limit usually does not exceed 10-8 mol per liter. Our sensors demonstrated a detection limit of up to 10-18, i.e. they are ten orders of magnitude more sensitive. Moreover, chromatography is an expensive method,” Olga Guselnikova (a group of associate professor Pavel Postnikov), one of the authors, a research fellow of the TPU Research School of Chemistry & Applied Biomedical Sciences says.

The sensor is a thin gold plate with a wavy surface. The team has used those plates in other studies. However, now the researchers have succeeded in grating organometallic frameworks consisting of zinc ions and organic elements. This is a porous structure that catches the targeted substances. It is possible due to the correctly selected pore size in the framework and the similar chemical nature of the compounds that need to be caught.

In particular, the researchers conducted experiments with the framework that included lactic acid. It is optically active, so the organometallic frameworks based on its enantiomers can be a trap for other optically active substances. This sensor construction was tested on an antiparkinson drug and a number of amino acids.

It is enough to drip a solution of the analyzed substance onto the plate. Further analysis can be carried out using a portable Raman spectrometer, which takes less than five minutes.

“Our sensor amplifies the signal for the spectrometer simultaneously by two methods. It is a significant element of this study.

On the one hand, the signal is physically amplified due to the effect of surface plasmon resonance, generated by the gold plate. On the other hand, our organometallic frames amplify the signal chemically. We were one of the first to demonstrate a sensory system, combining two amplifying methods of the Raman signal,” the researcher notes.

According to Dr. Guselnikova, these sensors can be used both to control the quality of drugs and environmental monitoring, i.e., to detect contaminants in water and soil.

The dangers of enantiomers in drugs were discussed in the middle of the 20th century after the thalidomide tragedy. Thalidomide was a popular sleeping pill that used to be prescribed to pregnant women in Europe, Australia, and the United States. It turned out, it caused congenital malformations in children whose mothers took thalidomide. They were caused by enantiomers. One of them provided the therapeutic effect, while the second one was introduced into the cellular DNA and impeded the normal replication process, necessary for cell division and embryo development. The thalidomide tragedy forced many countries to review existing drug licensing practices and tighten licensing requirements.