Scientists of Tomsk Polytechnic University (TPU) jointly with the colleagues from Siberian State Medical University (SSMU) and Immanuel Kant Baltic Federal University (IKBFU) studied the properties of calcium phosphate coatings deposited on titanium implants in various inert gases environment. The researchers managed to discover that the use of xenon positively affects the physicochemical, mechanical and biological properties of the coatings used in oral and maxillofacial surgery, orthopedics and traumatology. Moreover, no comprehensive research related to the impact of working gases on surfaces have been conducted before. The research findings are published in Biomedical Materials academic journal.

“Our research team is engaged in biomedical materials. However, the engineering university context does not imply having in-house medical researchers. That is why we cooperate with the researchers from SSMU and IKBFU obtaining all the required competences. This collaboration allows not only to obtain the results in form of academic articles, but also to solve the real-world problems of medicine. After all, practical application of our technological solutions without medical experts is simply impossible.

In the long run, our cooperation has a challenging goal – to make Tomsk a center of development and application of new medical materials and technologies. As engineers, we can propose new technical ideas and materials and they, as medical researchers, can put these ideas into medical practice.

This conjunction of technical and medical universities will help us elevate the patient treatment quality and reduce treatment time,” Sergei Tverdokhlebov, Head of the TPU Laboratory for Plasma Hybrid Systems, says.

The calcium phosphate coatings up to 1 μm thick were deposited on the titanium substrate by sputter deposition of hydroxyapatite targets in the working gas. Usually, an inert gas argon is used for these purposes. However, the TPU scientists studied not only the effect of argon but also experimented with neon, krypton and xenon on the coatings. Then, the scientists studied physicochemical, mechanical and biological properties of the obtained biomedical materials. The TPU researchers worked on coating formulation, morphology, mechanical properties, including adhesion and chemical composition, while SSMU and IKBFU staff conducted the cellular research. 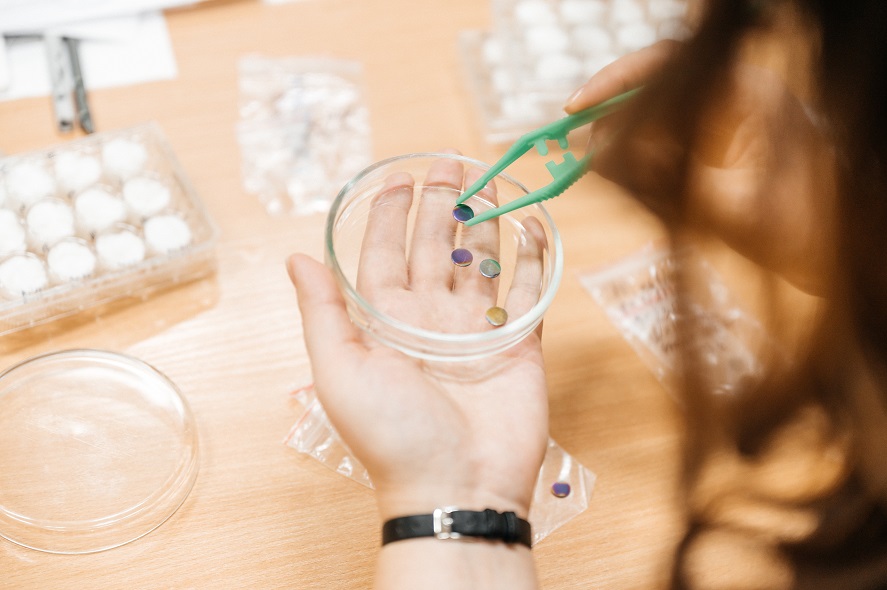 “The calcium phosphate coatings are studied not only at our university. Their properties are thoroughly studied and scientists work on their improvement. Our joint research work was aimed at obtaining new results in this direction and researching the impact of different inert gases on coatings. In our part of the research work, we found out that depending on a specific gas, the coating morphology, calcium to phosphorus ratio differ and the mechanical properties vary. For instance, the coatings formed using xenon show better adhesion, which a property that prevents the coating from peeling off too quickly from the surface. The results obtained with the use of cellular technologies surprised us because in this case xenon proved itself best as well,” Anna Kozelskaya, Research Fellow of the TPU Weinberg Research Center, one of the authors of the article, says.

Mesenchymal stem cells isolated from the donor`s adipose tissue were used for cellular research. These cells can transform into various types of cells, including adipose, bone, cartilage, probably, muscle and nervous cells. The cell research included testing cell viability, in vitro cell culture and gene expression. In this research work, it was necessary to ascertain that the coatings stimulate mesenchymal stem cell transition into bone tissue cells.

“The results turned out to be quite interesting. Inert gases are considered to be rather inert substances with similar properties. Nevertheless, they differently affect physicochemical properties of the formed calcium phosphate coatings. In its turn, it causes different cellular response starting from their gene activation that ultimately leads to the stem cell transition into osteoblasts.

Xenon, known as a gas for anesthetic purposes in medicine, showed the most favourable cellular response. If the results are confirmed by animal testing and clinical trials, we can talk about implementation of the technology to produce an extended implant panel used in bioengineering of bone tissue,”

Igor Khlusov, Professor of the SSMU Department of Morphology and General Pathology, adds.

At the same time, the scientists admit that xenon is quite an expensive inert gas to use. However, the coatings formed using it can be combined with thicker calcium phosphate coatings with a crystalline structure. It will allow reducing gas expenses and obtaining coatings with improved properties. The fact is that the coatings formed with xenon obtain entirely amorphous structure. It helps to stimulate bone formation in the first weeks after implant insertion. Calcium and phosphorus responsible for the bone tissue formation release well from this coating. Thereby, such thin coatings decompose very fast uncovering the implant.
“We propose to apply such a coating above calcium phosphate coatings with a crystalline structure. Thus, we can obtain another positive effect: an amorphous layer will decompose during the first two-four weeks providing for a maximum calcium and phosphate release. Then, the lower layers will provide for a further longer release of the elements, which will contribute to a prolonged process. The combination of such coatings will be the next stage of our research work,” Anna Kozelskaya explains.

The research was conducted with the support of the TPU Competitiveness Enhancement Program.

Russian for Engineers: How to Describe Processes and Phenomena in Nature?, Free Russian Class

In a Hotel, Free Russian Class