Scientists from Tomsk Polytechnic University jointly with Russian colleagues and researchers from Technical University of Denmark the first time have experimentally proved the existence of a two-dimensional (2D) curved flux of plasmonic quasiparticles, a plasmonic hook. A flat 2D hook is smaller than a 3D hook and possesses new properties, due to them, the researchers consider it as the most promising transmitter in high-speed microoptical circuits. The research findings are published in Applied Physics Letters (IF: 3,597; Q1) academic journal. 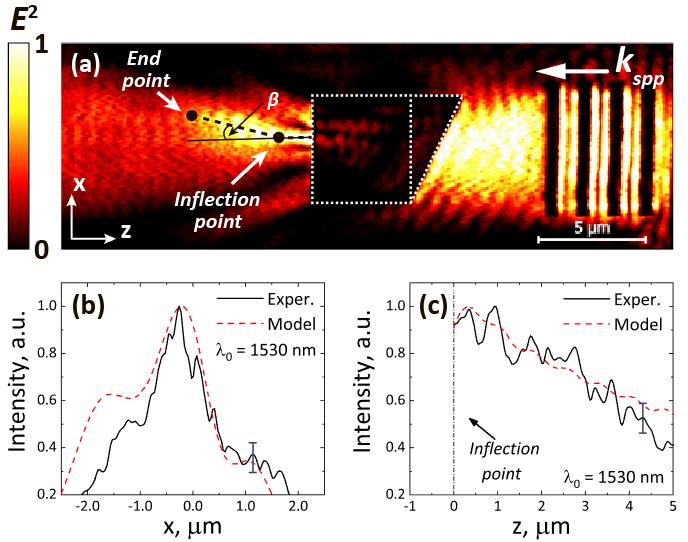 Electrons transmit information in existing calculation devices. The scientists suppose if electrons are replaced by photons, light quanta, it will be possible to transmit the data literally at the speed of light. In order that microoptical circuits and optical computers would become ordinary devices and become mass-produced, it is required to find a way to compress light to the nanoscale.

“We are searching for new types of curved wave fluxes, which can solve this task. Previously, we simulated and experimentally proved the existence of photonic and acoustic hooks and now we have proved the existence of a plasmonic hook. Nowadays, it is the most promising method to transmit a signal. The plasmonic wavelength is shorter than a 3D wavelength in free space and the area of radiation localization is in nanoscale. It is a crucial indicator for miniaturization,” Igor Minin, Professor of the TPU Division for Electronic Engineering, a supervisor of the research work, says.

The authors of the article obtained a flat plasmonic hook using a simple and cheap focusing element. The flat plasmonic hook is an asymmetric dielectric particle sized 4-5 μm and about 0.25 μm thick. According to the scientists, the participle shape can be various, in this case, it was a microcube with a docked prism. This particle was placed on the 0.1 μm thick gold film, on the other side of the film, the diffraction grating was deposited.

During the experiments, the laser ray was directed at the diffraction grating. Plasmon resonance occurred next to the surface of the diffraction grafting under sunlight that is the sunlight was converted into plasmonic waves. These waves passed through the asymmetric dielectric particle focused in a 2D curved ray.

“We obtained a 2D curved ray due to a special shape of a dielectric particle. One of the mechanisms of sub-wave structured focusing is based on the phenomenon of a plasmonic nanojet that we managed to experimentally fix for the first time earlier. When we shift free 3D space to plasmon polaritons, in other words, 2D space, the quantum nature of matter reveals. It allows implementing implicitly new opportunities to control the interaction between matter and light, for instance, to implement biosensing methods based on the detection of micro- and nanoparticles, biomolecules in the near field. Of course, it is too early to speak about the application of results, it is a task for future research. Therefore, any research and experiments to transmit signals based on optical principles are still in the practice of fundamental research. Scientists of various fields will have to overcome many challenges to create, for instance, a productive optical computer or even efficient microcircuits. To overcome these challenges, 10-15 years might be spent,” Igor Minin, TPU Professor, initiator of the research work, says.

The research work was partially supported by a grant from the Russian Foundation for Basic Research (20-57-S52001) and the TPU Competitiveness Enhancement Program. The researchers from Technical University of Denmark, Institute of Ultra-High Frequency Semiconductor Electronics of the Russian Academy of Sciences and Moscow Institute of Physics and Technology took part in the research work.