Scientists of Tomsk Polytechnic University jointly with their colleagues from Great Britain have proposed a physical concept of a new optical switch that forces to change light wave guidance.  The switch is a small glass particle of an unusual form. Its size is only about 1 µ. The research findings are published in the Annalen der Physik academic journal (IF: 2,276; Q1). According to the authors, such a simple switch can be used in high-speed optical computers in the long run. 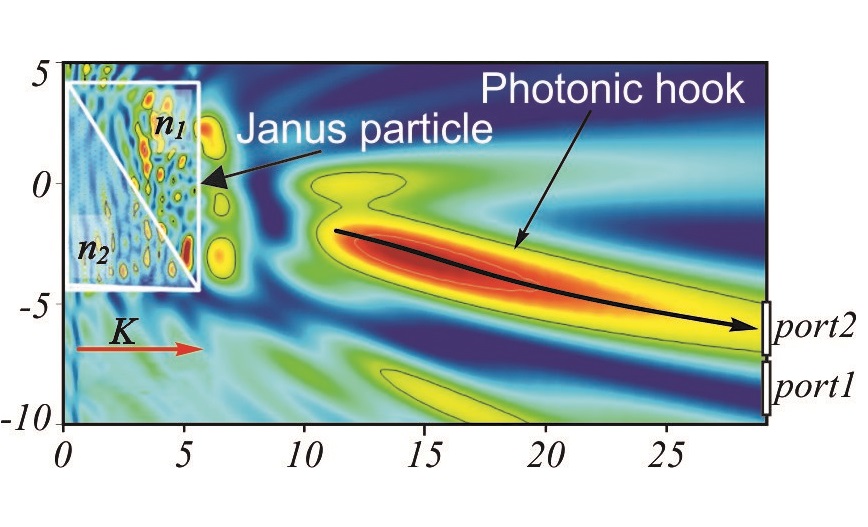 Photo: operating principle of an optical switch based on a photonic hook

Information is transferred by electrons in all currently existent calculating machines, including computers. Scientists believe if electrons inside the computers are replaced with photons, i.e. light quantums, then the data can be transferred literally at lightspeed. Researchers and companies of different countries are working on creating an efficient optical quantum computer. Prototypes of such computers have already been presented in the USA and China, however, these computers are capable to solve a very limited range of tasks. To widely apply optical computers, researchers still have to overcome a lot of obstacles.

“In such machines, it is essential to switch a signal at very high speed, i.e. to change the light guidance. Therefore, efficient switches are required. Researchers solve this task in different ways. Some researchers propose mechanical switches, however, these switches do not provide the required switching speed. While the others use specific crystals based on the nonlinear effects, which require developing new special materials and methods of controlling them. We proposed another principle in our article: particles of special forms from dielectric material can change the light guidance efficiently. In this case, we considered glass. Moreover, the proposed method does not require the application of metals,” Oleg Minin, Professor of the Division for Electronic Engineering of the TPU School of Non-Destructive Testing, a supervisor of the project, says.

The proposed switch is a small cube-shaped glass particle with a prism attached to it. Its operation is based on the effect of the photonic hook that was previously discovered by the research authors.

“It is a matter of a particle shape. Previously, we discovered that the light percolating a dielectric particle of this shape twists as a hook at the output. Due to its physical properties, the photonic hook possesses a very wide range of potential application. In this case, the calculations show if we change the light wavelength percolating the particle, then it is possible to change hook guidance.  That is the core of switching the signal, in changing the guidance,”

The researchers are currently preparing to conduct a series of experiments, which will prove the results of the simulation and calculations. The experiments will be conducted at Bangor University (Great Britain).

The research was conducted with the partial support of the Russian Foundation for Basic Research and the TPU Competitiveness Enhancement Program.