Scientists of Tomsk Polytechnic University jointly with their colleagues from the University of Aveiro (Portugal) and a number of some overseas universities have developed a polymeric material combining at the same time two properties, which are important for further application in medical implants. The material is biodegradable, i.e. capable to dissolve in a human body after some time, as well as possesses improved piezoelectric properties such as a capability to generate electric charge accelerating tissue regeneration. 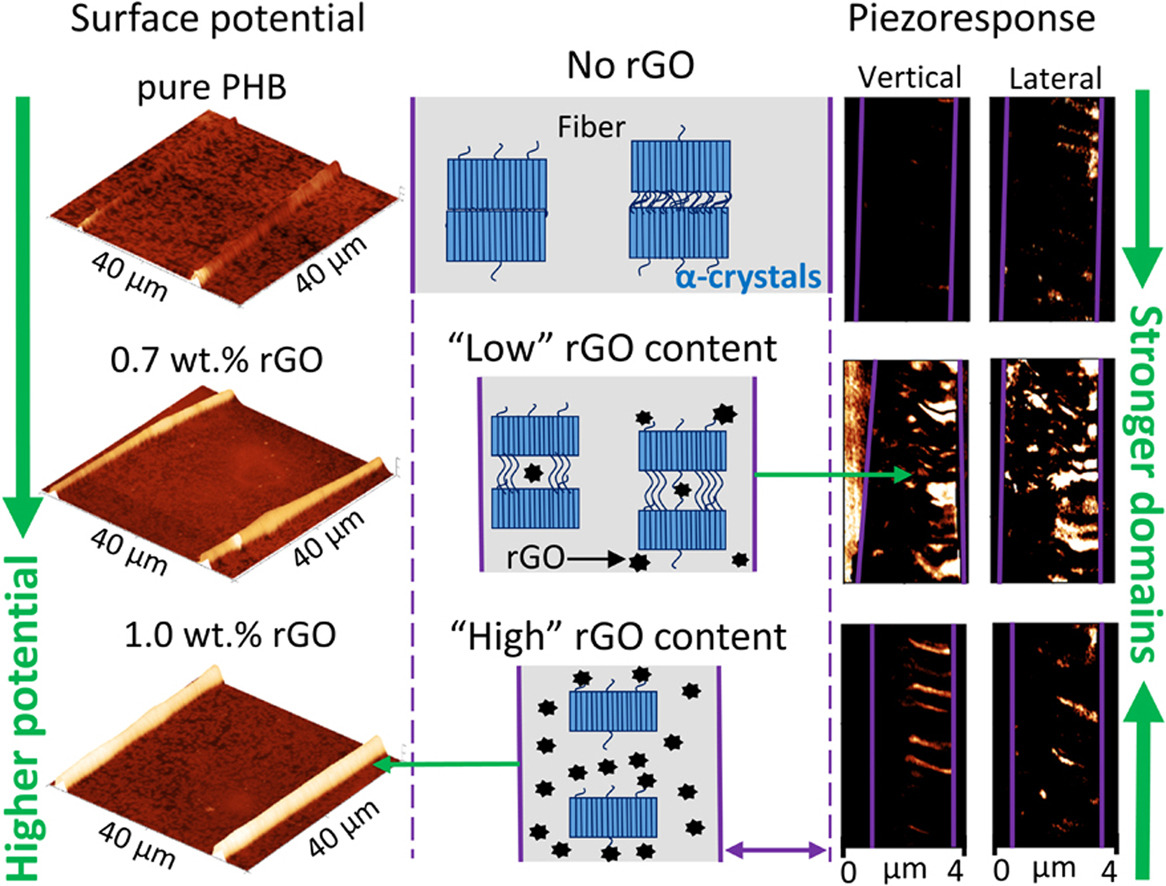 It became possible to improve material properties due to the impurity of reduced graphene oxide (rGO) flakes. The research findings are published in the Nano Energy academic journal (IF: 17,881; Q1). The research work is supported by a mega-grant of the Government of the Russian Federation.

“Nowadays, materials possessing piezoelectric properties are noteworthy for regenerative medicine as they are capable to generate electric charge without an external source of electrical energy, for instance, if the material is twisted or strained in the other way. Electrical impulses contribute to the stimulation of regeneration of living tissues, such as bone or nervous tissues after traumas. As a rule, worth piezoelectrics are not biodegradable. Biodegradation is a very important property for an implant, as a biodegradable implant is not required extraction after tissue regeneration, it falls apart into harmless components. It must be mentioned that extraction means a new surgery, probable tissue injury and risk infection,” Roman Chernozem, Research Fellow of the TPU International Research Center for Piezo- and Magnetoelectric Materials, one of the article authors, says.

“We were able to create a material with the worth piezoelectric properties, notably, a biodegradable material. There are only a few such polymers in the world,”

Roman Surmenev, Director of the TPU Research Center for Physical Materials Science and Composite Materials, explains. “Poly-3-hydroxybutyrate (P3HB), a biodegradable polymer, which was already used for research, was taken as basic material. In the initial polymer solution, there was added rGO nanoflakes. As we forecast, this additive essentially changed a molecular composition and polymer structure.”

The scientists are intending to research further how the new material interacts with living cells and tissues in order the material will be applicable for the production of biodegradable implants of the vast scope of application.

“The material is promising for implants in bone tissue engineering, regeneration of nervous tissue and some other vital types of tissues,” Andrey Kholkin, Director of the TPU International Research Center for Piezo- and Magnetoelectric Materials, adds.

Mega-grants are a program of the Government of the Russian Federation aimed at the development of the international cooperation of Russian universities. Within the mega-grant competition, Russian universities and scientific institutions receive sponsorship from the federal budget to support research in priority directions of technical and technological development of Russia. In accordance with the terms of the competition, the projects must be led by world-class scientists. The scientific achievements, the level of scientific publications, the experience of a leading scientist and key research team members in the selected field of research are taken into consideration. The invited scientist must arrange a world-class research laboratory at the university.

In the latest mega-grant competition, the two projects of TPU have received financial support. One of the mega-science projects is led by Andrei Kholkin, Professor of the University of Aveiro (Portugal), h-index: 56. He is a world-class expert in piezo- and magnetoelectric materials. A practical outcome of the mega-grant work will be new materials, which due to the direct physical impacts of their combinations with drug delivery can be used for growth control and differentiation of various cell types.