Monument to First Graduates of TPU Installed in Downtown Tomsk

A sculptural composition to a student of the first graduation has been installed next to the historical TPU Chemical Building (43A Lenina Avenue). An unveiling of the monument was held on October 15.

Representatives of the TPU Alumni Association became initiators of the sculpture installation. In this way, they decided to greet the university in the anniversary year. In 2021, the university celebrates its 125th anniversary since its foundation. 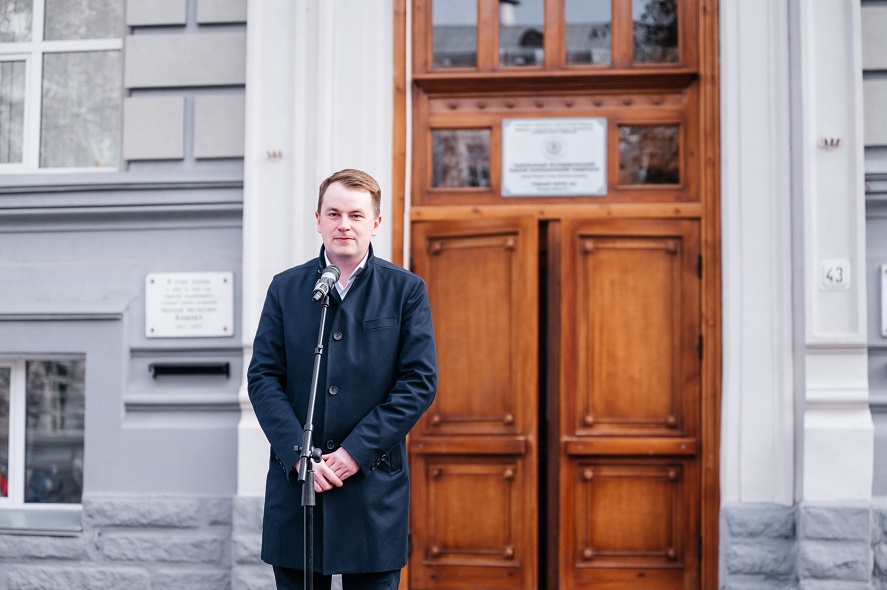 “It is a really significant day for Tomsk Polytechnic University and Tomsk. Today, we are unveiling the monument to the first graduates. The first graduates left the university walls 115 years ago. They were 16 and they all were engineers. Tomsk Polytechnic University has been training high-level engineers. I am sure that this sculpture will become a new hot spot in the town, a place where students, who are studying at TPU at the moment and graduates, who came to visit their alma mater, will gather together. Undoubtedly, it would not have happened without the support of our graduates.

I am sincerely grateful to our Alumni Association. I am certain this engagement will only surge up and we will be able to do a lot together with the family of TPU members. In total, there are 170,000 graduates and it means that together we are power,”

The bronze sculpture is a figure of a student of Tomsk Technological Institute (Tomsk Polytechnic University at present) wearing the historical uniform of the early twentieth century. The monument height is 2 m, the weight is over 300 kg. 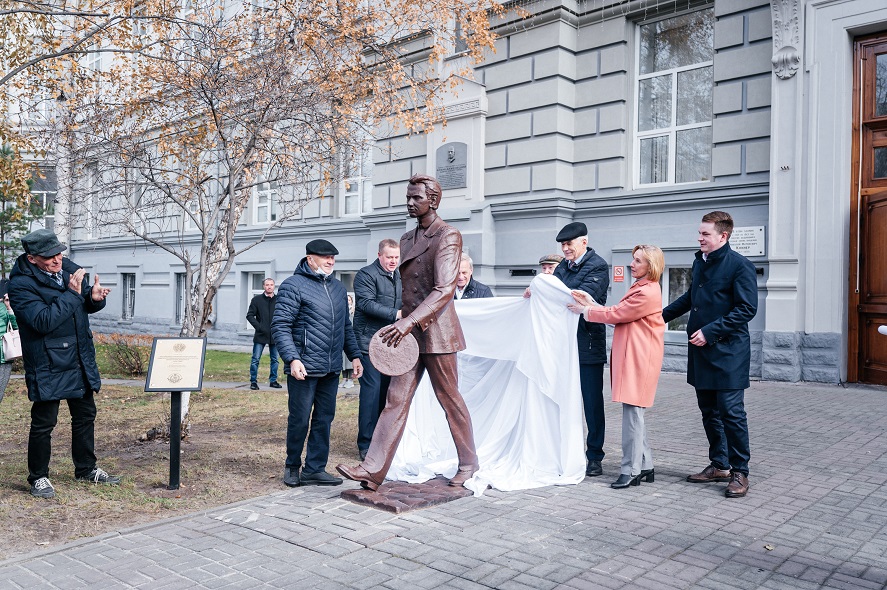 “It is always joyful when a new interesting and meaningful monument for Tomsk citizens appears on the map of our city. Today, we are attending the unveiling of such a sculpture — the monument to the first graduates of TPU. Students are a feature and treasure of Tomsk. Therefore, I consider that the sculpture will become one more iconic landmark of Tomsk, which is known to the world as a student capital. Obtaining a degree was always prestigious but complicated. Those 16 students, who were able to graduate, i.e. one person out of 12 enrolled, were real stars. They were those people who laid the foundation of the engineering elite, gave continuation of engineering education and engineering development in Siberia and in the Far East. It is very pleasing that every TPU rector considered engineering education to be an elite one. Hence, Tomsk was a city where elite engineers were trained. TPU is the oldest technical university of the Urals and nowadays remains a leader. We believe there will be a new tradition that students, enrollees and young professionals will find the personification of good in this monument, will come to it in case of different events,” Luidmila Ogorodova, Deputy Governor for Scientific and Educational Complex and Digital Transformation, says.

The TPU graduates also raised funds to create the monument. A creative team under Leonty Usov’s supervision created the sculpture. The team included the sculptor Vladimir Romanov and the caster Maxim Petrov. 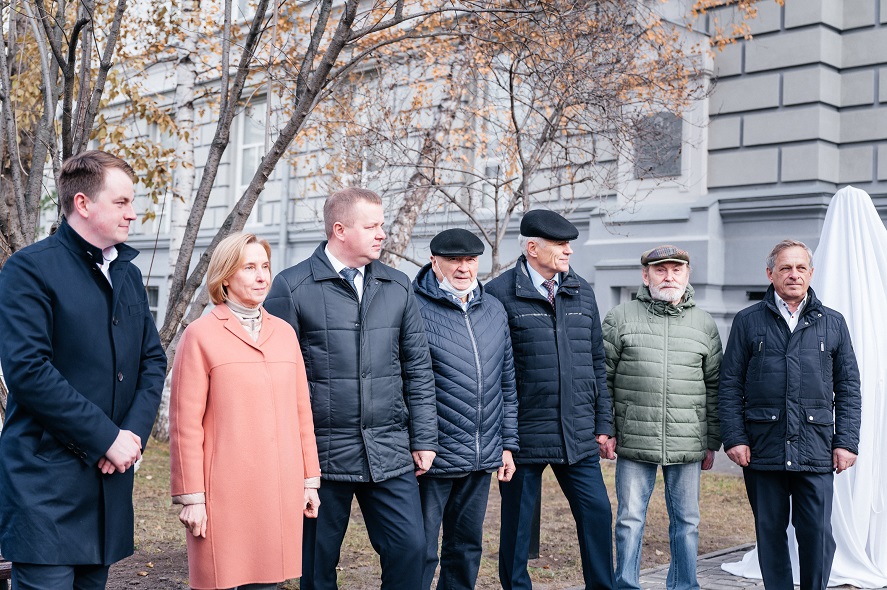 “It was an idea of the graduate initiative group. We wanted to greet TPU on the 125th anniversary, make something memorable, fundamental, to present the outright gift to the university. We want this sculpture will embody the image of all graduates. We hope that it will be a meeting point for all members of the TPU community,” Vladimir Krivovyaz, Director of OOO Commercial Industrial Enterprise Provansal, Vice-President of the TPU Alumni Association, says.

In his turn, Egor Yazikov, Professor of the TPU Division for Geology and the President of the TPU Alumni Association, thanked everyone who made a contribution to the project. Yury Pokholkov, an ex-Rector of TPU, Head of the TPU Research Center for Management and Technologies in Higher Education, noted that TPU graduates of all years played a huge role in the development of the Asian part of Russia. 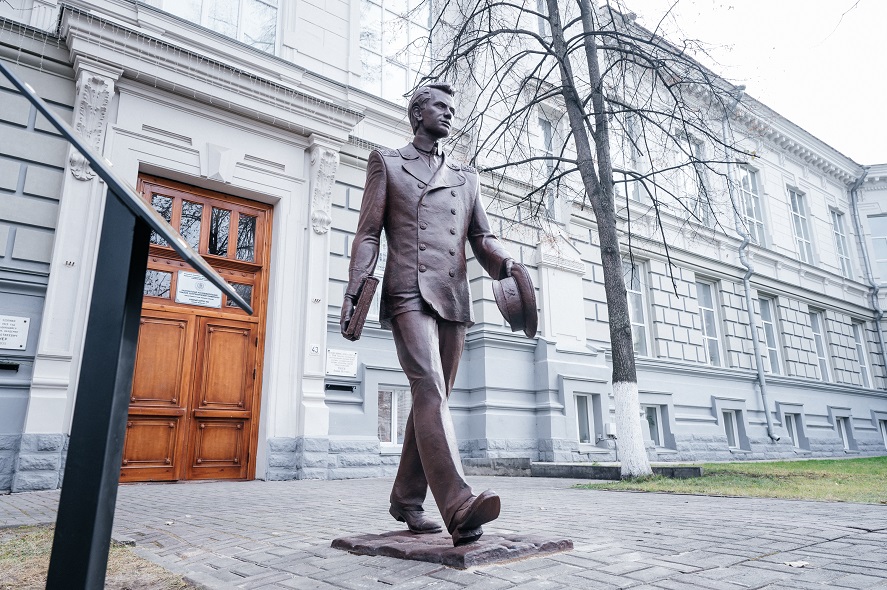 “Let’s imagine 1906 when the first engineers of TTI graduated. At that time, there were no chemical, metallurgical, coal mining industries in this part of Russia. There were neither nuclear nor energy industries. All of this was made by graduates of Tomsk Technological Institute, which later became Tomsk Industrial Institute and is now known as Tomsk Polytechnic University. We should remember it and follow the people who studied here,” he says.

This year is the 115th anniversary of the first engineering graduation within the walls of Tomsk Technological Institute.

The first graduation was in 1906. Only 16 people students out of 203 enrolled were able to graduate: 15 graduates gave the title of a mechanical engineer and one graduate obtained a diploma of a chemical engineer.

The mechanical engineer Innokenty Butakov, afterwards a prominent scientist, founder of the Siberian school of heat power engineering and Professor Vladimir Vanyukov, an eminent science and technology professional, who finally became an outstanding metallurgist, one of the founders of National University of Science and Technology MISiS, its dean and professor, were among of those first graduates.